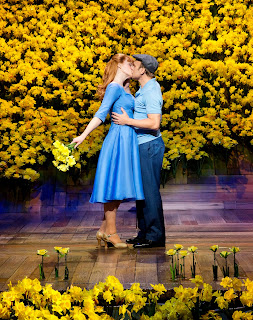 The latest musical from composer Andrew Lippa (“The Addams Family”) is based on the novel by Daniel Wallace and John August’s screenplay for the 2003 Ewan McGregor/Albert Finney film that was directed by Tim Burton. (August wrote the musical’s book.)

It’s an imaginatively staged, quite moving story of Will Bloom (Bobby Steggert), a young man with issues about his father Ed (Norbert Leo Butz), a former traveling salesman and a spinner of fantastical tall tales filled with witches, mermaids, giants, and werewolves, all of which Will believes must be masking a dark secret. When Ed is diagnosed with cancer, Will returns to their Alabama home with his new bride (Krystal Joy Brown) to help his mother (Kate Baldwin) and try to resolve the inner conflicts with his dad.

Director/choreographer Susan Stroman pulls out all the stops when the story calls for it, as in a big USO-type wartime number, a circus number with syncopated elephants (!), and a TV western come to life in a dying man’s room, but for all of that, keeps things nicely scaled, and never goes over the top. For the most part, her stellar work here draws one into the intimate side of the story, and she has directed those scenes most affectingly.

Norbert Leo Butz is superb, morphing effortlessly from older man, gradually succumbing to his terrible illness, to young man, to everything in-between and back again. He carries the show with his fine acting, commanding singing and, on occasion, nimble dancing.

Kate Baldwin is especially lovely as his patient, loving wife, looking smashing in all her ages, and singing with crystalline purity. And Bobby Steggert is ideally cast, as the uncomprehending all-too-pragmatic son.

The supporting players are all well cast, including Brad Oscar as the circus owner with a dark secret, Ryan Andes as a sympathetic giant, and Kirsten Scott as a popular cheerleader in Ed’s childhood hometown, who has some poignant moments.

Andrew Lippa’s score (music and lyrics) is full of lovely things, including “Stranger,” “Two Men,” “I Don’t Need a Roof,” and “Daffodils," a beautiful first-act closer staged against designer Julian Crouch’s profusion of those flowers.

This is a bittersweet story, to be sure, and one that doesn’t fit the mold of your typical Broadway musical, but the audience responds warmly throughout.