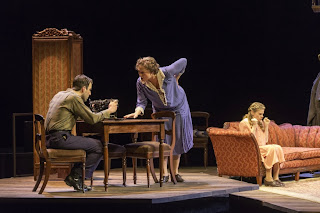 This is the second production of Tennessee Williams’ classic play in two years, and if you remember that Roundabout mounting with Judith Ivey (or even the Jessica Lange Broadway revival of 2005), and are wondering whether this present one is worth your time, the answer is a resounding yes.

The production played in Cambridge earlier this year at the American Repertory Theater where it deservedly received rapturous reviews.

Cherry Jones is indeed magnificent as Amanda Winfield, overbearingly domineering mother of budding writer Tom (Zachary Quinto) and lame, painfully shy daughter Laura (Celia Keenan-Bolger). Brian J. Smith is the Gentleman Caller whom Tom brings home from the factory on his mother’s bidding in the hopes of finding a suitor for Laura.

Jones is in full command of her craft and dominates her scenes with the sheer force of her personality and emphatic body language. She’s so powerful from even her first moments on stage, in fact, that one almost fears she’ll have nothing to build up to, but she sustains the energy throughout, and demonstrates more than do many other Amandas how desperate she is for her children’s well being, rather than just a woman pathetically clinging to a more genteel past, now long gone.

For all her ferocity, Jones skillfully plays the humorous moments, such as her primping and flirtatious coyness when she puts on her old cotillion dress from her Southern belle days to impress the Gentleman Caller.

She’s far from the whole show, however, as narrator Quinto makes an outstanding, sensitive Tom refreshingly individual in the vocal cadences of his monologues, Keenan-Bolger an exquisitely fragile Laura, and Smith an exceptionally sympathetic Jim. The candlelit scene between him and Laura has truly never been more affecting. In that scene and every other, John Tiffany’s direction is highly perceptive.

One of Tiffany’s most interesting stylistic touches is Laura’s first appearance as Tom summons her to memory. It could have been gimmicky, but works memorably. (Steven Hoggett is credited with movement.)

Bob Crowley’s abstract set design is on the spare side. And if you sit near the back of the orchestra, as I did, you won’t see the symbolic separate platforms on which the Wingfield living and dining rooms play out, nor the moat beneath, nor the full reach of the abstract fire escape, just the few bits of furniture against a black void. Still, the performances are so good that they’d register even on a bare stage. Natasha Katz has provided the moody lighting

Clive Goodwin’s sound design makes everything crystal clear even in the far reaches of the theater, and Nico Muhly’s musical score sets the otherworldly mood for this memory play.

Photo: Michael J. Lutch
Print this post
Posted by Harry Forbes at 4:32 AM