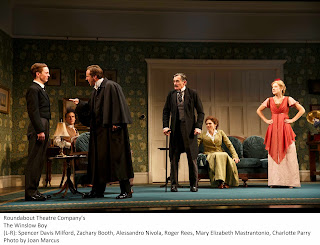 This latest revival of Terence Rattigan’s sturdy, beautifully crafted 1946 play is first-rate in every way. The production hails from London’s Old Vic where it was mounted early this year with different actors, but there’s nary a weak link in Roundabout’s cast. Director Lindsay Posner directs again, with the action playing out on Peter McKintosh’s beautiful period set.

But, in fact, once Arthur is convinced of his boy’s innocence, he is willing to endure any emotional or financial hardships to pay for Ronnie’s defense and publish his son’s innocence, a case that will pit private rights versus the public good. And Arthur is willing to sacrifice Dickie’s Oxford education, Catherine’s engagement, and the household staff in the process.

He enlists a celebrity barrister Sir Robert Morton (Alessandro Nivola) who, in the brilliant first half curtain closer, ferociously interrogates the boy to determine his culpability in the theft.

Rattigan based the play on a real-life incident, involving a boy named George Archer-Shee who, ironically, would die in World War I.

One marvels anew at the skill of the play’s construction. Unlike Broadway’s concurrent “A Time to Kill” and so many other courtroom dramas, “The Winslow Boy” never gives us the courtroom scenes (though the superb 1948 film with Robert Donat did), but rather we hear of the proceedings through accounts of those who attend the hearings.

The fact that the alleged theft is such a minor offense, and even Ronnie himself has, in short order, moved past it as he now settled into a new school, makes Arthur’s fervor for justice all the more intriguing. But even sister Catherine feels compelled to see the case through to the bitter end. “All that I care about is that people should know that a Government Department has ignored a fundamental human right and that it should be forced to acknowledge it,” she states.

Rees’ physical transformation over the play’s four acts, as we see the toll exacted by the emotional strain, is masterful, and Parry as his chief ally, his suffragette daughter, is equally commanding.

Mastrantonio is the very model of a British matron, etching her character with compassion and spirit. In one of her most emotional scenes, she berates her husband for pursuing the case out of pride. Booth is spot on as the superficial older son most focused on playing his gramophone as he learns the latest dance craze.

Nivola is has the requisite authoritative manner of Sir Robert. Michael Cumpsty does his usual impeccable work, here as the Catherine’s rejected suitor Desmond, the family solicitor. And Henny Russell is delightful as a not-quite-proper parlor maid, whose faux pas propel the action at key points.

This is the second Rattigan winner for the Roundabout in as many years, coming as it does after their mounting of the relatively rare “Man and Boy.” Let's hope there are more to come.

Print this post
Posted by Harry Forbes at 4:37 AM