An American in Paris (Palace Theatre) 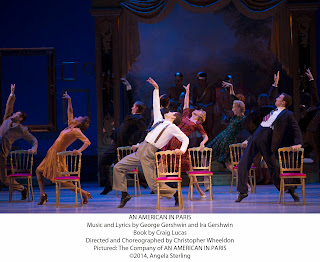 No need to mince words here, this is one of the very best movie-musical-to-stage adaptations, a model, in fact, of how it should be done. Not slavishly faithful to the film, but keeping quite close in spirit to its source, while further respecting the audience with an uncommonly intelligent script and musical numbers that don’t pander to the lowest common denominator.

It was, in fact, hugely instructive to see this show on the very next night after attending “Gigi.” Consider: both originated from MGM’s fabled Arthur Freed unit, were directed by Vincente Minnelli, starred Leslie Caron, were written by Alan Jay Lerner, were multiple Oscar winners each copping Best Picture, and, of course, were set in Paris, but vive le difference!

Lucas has transposed the story closer to the end of the Paris occupation, so the aftermath of World War II is still very much apparent. (Lerner's script for the 1951 film was distanced from those events.)

But the basic plot remains the same. Ex-GI Jerry Mulligan (Robert Fairchild) is trying to make his mark as an artist, befriends a musician Adam (Brandon Uranowitz), and falls for a girl Lise (Leanne Cope) who, it happens, is engaged to Jerry and Adam’s friend Henri (Max von Essen), here a would-be entertainer, unlike the film’s Georges Guetary who was the real deal.

Among Lucas’ embellishments, Adam is now a composer working on the ballet that will be designed by Jerry, and will star Lise. Henri’s sexuality is here suspect, and his parents (Veanne Cox and Scott Wilson), wealthy textile merchants, are major characters. And Adam is secretly in love with Lise as well, adding romantic complications.

Despite the occasional homage to Gene Kelly’s choreography, Wheeldon’s work here is more classically balletic, though he employs a number of dancing styles. The show opens with a fairly dark-themed pantomime showing the aftermath of the occupation, including how certain collaborators were dispatched. You might think that a little heavy in concept, but it works.

Crowley’s set and Natasha Katz’s lighting design are similarly subdued at the start but the color palette and illumination brighten as the show progresses.

The songs – liberally lifted from the Gershwin songbook – are wonderfully integrated, and unlike other Gershwin-derived musicals, don’t sound awkwardly shoe-horned in, even when, say, Lise begins singing something as familiar from other contexts as “The Man I Love.” 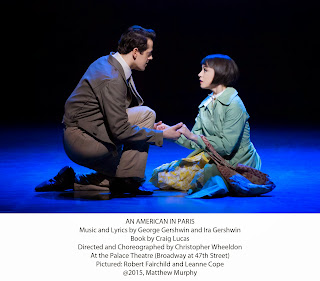 The arrangements are most attractive, too, as when Jerry, Adam, and Henri harmonize, as they do on a few occasions (e.g. “‘S Wonderful,” “They Can’t Take That Away from Me”), or when characters are singing at cross purposes (as in “For You, For Me, For Evermore”).

The cast is quite wonderful across the board. Fairchild is a marvel, dancing like a dream, singing most attractively, and projecting just the right sort of regular guy persona that never allows the dancing to seem pretentious. British ballet star Leanne Cope with her gamine haircut and convincing French accent channels just enough of Leslie Caron to satisfy, but makes Lise her very own. (Perhaps if she ever decides to take a hiatus from the show, she could fill in for Vanessa Hudgens as “Gigi.”)

Uranowitz has a marvelously sardonic quality, and he’s funny without imitating the movie’s Oscar Levant. Von Essen makes Henri, who could so easily be played as a stereotype, into a real and touching figure, and yes, he does get to do Guetary’s indelible “Stairway to Paradise” number, albeit without a staircase. Jill Paice is made up to resemble MGM’s Nina Foch but, like von Essen, makes much more of her character than simply your standard “other woman” role.

By now you’ve guessed that I think the show is pretty swell. Don't miss it.