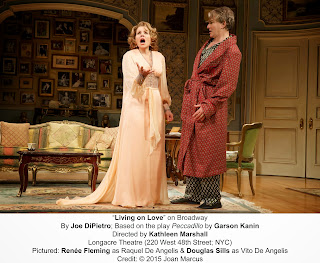 Oh, dear. I’m afraid Joe DiPietro’s reworking of Garson Kanin’s last play “Peccadillo” as a vehicle for Renee Fleming's Broadway legit debut is just about as mediocre as a show can be.

The Kanin original, from the little I’ve been able to read of the text, doesn’t exactly seem any great shakes either, but I’d be willing to bet that, done well, it would have more to commend it than the at-best-pleasant but strictly provincial summer stock concoction holding the stage now. Someone like Ken Ludwig might have made much more of this material, but “Lend Me a Tenor” this is not.

The original “Peccadillo” seems to have played Ft. Lauderdale in 1985. (Ft. Lauderdale actually comes in for some drubbing in this version.) The cast included Christopher Plummer, Glynis Johns and Kelly McGillis, all of whom sound a lot more interesting on paper than the present crew.

As for the plot, the time is 1957. Vito De Angelis (Douglas Sills) is a famous conductor, forever resenting Leonard Bernstein’s greater good fortune. His wife Raquel (Fleming) is a famous operatic diva on the decline; in the original, she had given up her career for the sake of her husband. Here, Ft. Lauderdale is, in fact, one of the few places she can be booked. Vito is working with ghost writer Robert (Jerry O’Connell) on a memoir, but it is going painfully slow.

Robert, though, is utterly smitten with Raquel, and before long, he’s helping her with her memoirs, after Robert’s pretty editor Iris (Anna Chlumsky) takes over the Vito assignment. Romantic sparks soon begin to fly between Vito and Iris, and between Robert and Raquel, with farcical complications.

There are also a pair of “comic” menservants, Bruce (Blake Hammond) and Eric (Scott Robertson), who are slavishly devoted to the De Angelis household.

The single most enjoyable sequence of the evening is a delightful interlude (having absolutely nothing to do with the play) wherein Hammond and Robertson perform the old Eddie Cantor chestnut “Makin’ Whoopee.” However, the two of them are also responsible for the most cringe-worthy moment of the show, when towards the end, they profess their love for each other in the sappiest of sentimental declarations.

Robert is written in the most dreadfully irritating manner. When asked not to touch the snow globes that Vito and Raquel have amassed from their world travels, for instance, he does just that at the first opportunity. Why? He’s a total doofus in every way, and I’m afraid O’Connell adds not one iota of charm to the part. Chlumsky, for her part, is appealing but it’s a nothing role.

Fleming goes through her paces agreeably enough, and delivers her dialogue competently, though she’s hardly convincing as a self-absorbed diva. Every so often she sings a few bars of an aria, sounding lovely, of course. And, near the end, she and Sills deliver a sweet version of “Always.” But as far as a future legit career is concerned, let’s just say that Cherry Jones needn’t pack her bags. In another era, one might envision Fleming guest-starring on Carol Burnett’s show as a lark, and that’s about the level of material here.

The most complete performance comes from Sills, with a faux Italian accent, though his part is a caricature. This was to have been a limited engagement through August 2, but it is now closing this Sunday.