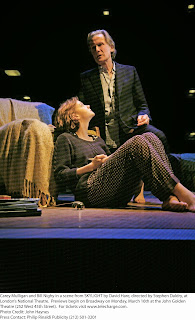 I wish I could remember all the nuances of my first exposure to David Hare’s play, which I caught in Richard Eyre’s National Theatre premiere production back in 1995 so I might make a more detailed comparison. But all these years later, I can certainly attest that Bill Nighy and Carey Mulligan are offering very much their own interpretations of the roles created so finely by Michael Gambon and Lia Williams.

And Bob Crowley’s marvelous set – a cluttered, ramshackle council flat against a vista of other apartments – is, as well, a unique creation, quite different than John Gunter’s original design.

Mulligan’s Kyra is a schoolteacher who once the lover of the married Tom (Nighy), an affluent restaurateur. Kyra and Tom’s wife Alice were friends and co-workers (Kyra worked in one of Tom’s restaurant), and they had all lived under the same roof, until Alice discovered the affair. Now Alice has died of cancer, and Tom has come round to Kyra’s shabby flat to reconnect with her. And as the play proceeds, indeed they do, but the disparity of their lifestyles and societal attitudes continues to be a barrier between them, despite their enduring affection.

The play is said to reflect the dichotomy of post-Thatcher era England, pitting a character committed to wealth against one who believes that helping one individual will make a difference. That theme is very much apparent, but all that is subtext to a very personal story.

Despite the quality of Hare’s writing, I recall thinking that the play was occasionally talky and could benefit from a trim. Time has not altered that opinion, despite Nighy and Mulligan’s extremely engaging performances. She creates a very empathetic character, and handles the considerable on-stage cooking aspects of her role (Spaghetti Bolognese) with aplomb. (Prepare to breathe in the flavorsome meal throughout the first act, by the way.) And Nighy is full of nervous tics and mannerisms as the less lovable Tom. Despite Tom’s unlikable traits, Nighy does generate the requisite sympathy. Still, I couldn’t help remembering some of Nighy’s very early work at the National Theatre where those same mannerisms seemed to me horribly affected, while over time, they’ve been toned down and are now a seamless part of his persona.

Though, strictly speaking, Nighy is now older than he should be for his 50-year-old character (he originally played the role in 1997), it hardly matters, as the pair do skillfully convey the passionate if volatile chemistry still between them.

For the most part, “Skylight” plays as a two-hander, but there is excellent work from Matthew Beard as Tom’s estranged son, who appears in the first and last scenes, the latter most touchingly written and played.

Count this as another feather in the cap of director Stephen Daldry, following as it does so closely on the heels of his excellent work on “The Audience.”