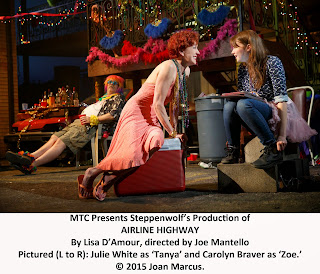 Lisa D’Amour’s chaotic ensemble piece about the denizens of the Hummingbird Motel New Orleans motel features an accomplished cast under the direction of the redoubtable Joe Mantello. But, even so, I can’t say this Steppenwolf Theatre Company import really grabbed me.

Scott Pask’s multi-level set – the exterior of the motel – overlooking the parking lot downstage, allows for simultaneous action on these levels which suits the construction of D’Amour’s play. But I found the overlapping dialogue that ensues from this setup, and which dominates the evening, more than a little off-putting.

As the Hummingbird’s residents prepare for the funeral of the still living Miss Ruby, a former burlesque queen, dying in a room on the upper level (she has specified that she wants her funeral before she passes), we learn about the sordid lives of her motley extended family.

Other roles are well played by Scott Jaeck as the hotel manager, Ken Marks as a failed poet, and Tim Edward Rhoze as the local handyman.

Though I admired the performances, I can’t say I really found much of what transpires very interesting, at least not until, in the second act, they cart Miss Ruby (very fine Judith Roberts) gingerly down the stairs, and she delivers an interior monologue of substance, a grand old fashioned theatrical moment of which “Airline Highway” should have had more.