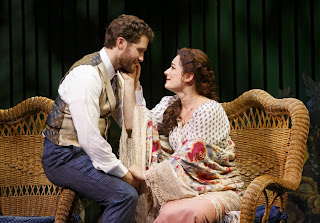 Emotionally manipulative, overly simplistic and unabashedly commercial as this show is, “Finding Neverland” is far from being devoid of merit. The three leads are excellent, the story of how J.M. Barrie came to write “Peter Pan” and his relationship with the Llewellyn Davies family is an ever-touching one, and much of Diane Paulus’ staging is eye-fillingly clever.

On the negative side of the ledger, Gary Barlow and Eliot Kennedy’s score – completely different, incidentally, from that composed for the show’s first incarnation in the U.K. -- is strictly in a generic pop contemporary vein for a story that cries out for at least a little Edwardian pastiche.

It’s rather remarkable that what is essentially a backstage story and a bittersweet (even tragic) romance involving divorce, should be marketed as family entertainment, though book writer James Graham has done everything possible to cram as many “Peter Pan” elements as possible into the show, including Nana (the Darling family dog), the Tinker Bell spotlight, Captain Hook and the crocodile, and all the rest.

The narrative follows the basic outline of the popular Johnny Depp film. Playwright Barrie (Matthew Morrison) is under pressure from his producer Charles Frohman (Kelsey Grammer who, by the way, doubles amusingly as Captain Hook in the fantasy sequences) to come up with a new play.

He is experiencing writer’s block, until he falls under the spell of widow Sylvia Llewellyn Davies (Laura Michelle Kelly) and her four boys (Aiden Gemme, Hayden Signoretti, Sawyer Nunes, and Noah Hinsdale) after which, he is inspired to write his most famous work. His devotion to the Mrs. Davies and the boys causes unkind gossip, and meets with stern disapproval from Sylvia’s mother (Carolee Carmello) and his superficial former actress wife Mary (Teal Wicks), with whom he soon separates when he discovers her liaison with another man.

The story is both streamlined and romanticized; in actuality, Sylvia was still married when she first encountered Barrie, and there were five children, not four. And the creation of “Peter Pan” was obviously far more complex in real life than Barrie merely finding his inner child.

There are many felicitous bits of staging, including an elaborate racing against the clock production number (“Circus of Your Mind”), and a boisterous pirate number (“Live by the Hook”) that concludes the first act (choreography by Mia Michaels.) There is, too, a particularly wondrous stage effect towards the end which truly rates as one of the most beautiful and moving ones I’ve ever seen. That moment, which I won’t spoil, is pure magic, and it’s a pity there weren’t more like it.

Matthew Morrison who has come to Broadway in place of his exceedingly talented predecessors in the role -- Britain’s Julian Ovenden and Boston’s Jeremy Jordan, both of whom were praised for their work -- gives a gentle, self-effacing performance, with a pleasing Scottish burr.

Laura Michelle Kelly, who played such a memorably starchy title character in the original London “Mary Poppins” before the Disney machine decided to soften the character and make her more palatable for Broadway, is lovely of figure and voice as Sylvia. And Kelsey Grammer, who triumphed several years ago in the revival of “La Cage aux Folles,” is outstanding as Barrie’s producer, the American impresario Charles Frohman.

The Darling children, especially young Gemm at my performance, give winning performances.

The songs, as indicated, are in an anachronistically contemporary vein, with obvious calculation. I found the raucous numbers, such as the cast celebrating in a local pub and the first act pirate finale more grating than exhilarating (and Jonathan Dean’s sound design pushes the limit uncomfortably), but there are some quiet ballads that fall pleasantly – if (at first hearing) unremarkably – on the ear: Sylvia’s “All That Matters,” Barrie and Sylvia’s “What You Mean to Me,” and Barrie and Peter’s “When Your Feet Don’t Touch the Ground.”

And reservations aside, the audience was, I must acknowledge, thoroughly engaged, and gave the show a rousing standing ovation at the end.

Photo: Carol Rosegg
Print this post
Posted by Harry Forbes at 9:36 AM