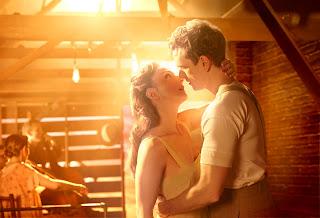 After a 2014 premiere at the Old Globe in San Diego, and a brief run at the Kennedy Center, “Bright Star” comes to Broadway in superb shape: a thoroughly absorbing and completely original musical from the surprisingly potent team of Steve Martin and Edie Brickell.

The story concerns one Alice Murphy (Carmen Cusack), a free-spirited young woman in a small North Carolina town and her ill-fated romance with Jimmy Ray (excellent Paul Alexander Nolan), the son of the controlling mayor (Michael Mulheren), in the 1920s.

What gives the story added texture is the parallel story of this same woman decades later. Now a successful editor of a literary journal, she encourages the literary efforts of a returning World War II vet Billy (likable A.J. Shively) who has left his childhood sweetheart (the appealing Hannah Elless).

Cusack is quite superb in both ages -- whether uninhibited teenager or starchy matron -- a really textured performance and most beautifully sung, and the cast supporting her is also top level. There’s Stephen Bogardus as Billy’s widowed father; Jeff Blumenkrantz as Alice’s humorously dour assistant Daryl at the magazine; Emily Padgett as his wise-cracking associate Lucy; Stephen Lee Anderson as Alice’s painfully conflicted preacher father; and Dee Hoty as her loving mother. So, too, this is a cast athat acts as well as it sings.

With an uncommonly fine bluegrass score (music by Martin & Brickell, lyrics by Brickell), encompassing gospel and swing, and a superior book by Martin, the show is skillfully constructed, unfolding much like a juicy novel. (It is said to be inspired by a true event.) And though the story is sometimes melodramatic, like all good drama, it always seems grounded in plausible reality as you’re watching it. A porch reunion between Alice and her father is but one of many examples of Martin’s well-judged and intelligent dialogue, and the quality of the acting.

Walter Bobbie directs the narrative for maximum impact drawing sensitive performances from all, while Josh Rhodes’ choreography from barn dances to 1940s jitterbugging is seamlessly interwoven and never intrusive.

Under Rob Berman’s expert musical direction, August Eriksmoen’s orchestrations create a gorgeous palette of sound, and the songs themselves all bespeak quality. The musicians earn well deserved applause when who are given a chance to strut their stuff during the entr’acte.

Eugene Lee has designed a spare but flexible and most attractive rolling set which suits the rural Blue Ridge mountain ambience to a tee (and an eye-catching miniature train high above the stage), complemented by Jane Greenwood’s costumes, Japhy Weideman’s lighting, and Nevin Steinberg’s sound design.

I was captivated by this highly original and warmly romantic show, refreshingly devoid of of cynicism and not afraid of embracing good honest sentiment, and I sensed the packed audience around me felt the same way, hanging on every plot turn and admiring of the talented ensemble before them.