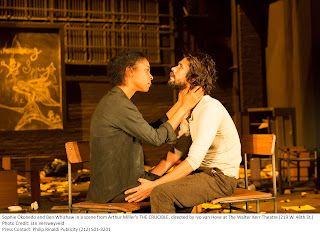 For all of that, he has assembled a first-rate cast who would, for the most part, do justice to a more traditional production. It’s a great treat, for instance, to see British actor Ben Whishaw, so superb in movie and TV roles (most recently, “London Spy,” seen on BBC America) as farmer John Proctor whose virtuous wife Elizabeth (the fine Sophie Okonedo) is unjustly imprisoned for witchcraft, thanks to the machinations of a former housemaid Abigail (Saoirse Ronan, far different than in her sympathetic role in “Brooklyn”), with whom John, to his shame, once dallied. Bill Camp is excellent as the Reverend Hale who comes to the Proctors’ home at the behest of the court to question their devoutness. Jason Butler Harner is the Reverend Parris whose niece Betty (Elizabeth Teeter) starts the accusations going when she seems to be in a possessed state after naked revels in the woods with Abigail.

Tavi Gevinson is perfect as Mary Warren, the most vulnerable of the girls, and the one who comes closest to recanting the accusations against the innocent townspeople. Jim Norton and Ray Anthony Thomas are husbands protesting the innocence of their wives. And Ciaran Hinds, particularly good here, is the unyielding judge presiding over the trials.

Really all of the performances are fine, for which no small credit goes to van Hove who does finds dramatic truth in the situations certainly. So, too, most of his staging bespeaks intelligence, and yet, for all of that, I found the avant-garde staging fatally damaging. And I don’t recall “The Crucible” ever feeling so long.

There are superb moments, such as John and Elizabeth’s heartbreaking final scene together towards the end. There’s a wonderful supernatural moment -- a coup de theatre, as they say -- towards the end, but it makes little sense when you think about it, for all its dramatic effect. Are we meant to think, in this scene and several others, that the girls really do possess occult powers?

This production’s merits notwithstanding, I must confess I remember the 2002 Richard Eyre revival with Liam Neeson and Laura Linney, and the 1991 National Actors Theatre one with Martin Sheen and Maryann Plunkett as being far more satisfying.