Pericles (Theatre for a New Audience) 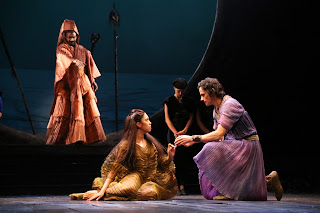 I had only encountered the Bard’s unwieldy 1608 epic twice before: director David Thacker’s 1990 production by the RSC at London’s Barbican, and the well-cast 1984 BBC production which later ran on PBS here.

But those were so long ago that, for all intents and purposes, the play was virtually new to me in TFANA’s handsome mounting. Beautifully designed by Robert Jones, costumed by Constance Hoffman, and and lighted by Stephen Strawbridge, with expert sound design by Daniel Kluger, the nearly three hour evening was generally enthralling, though admittedly, the second half more so than the first. In fact, scholars believe that Shakespeare delegated the writing of the first two acts to one George Wilkins (whom literary critic Harold Bloom dubs a “lowlife hack”). And there’s no question that the latter parts, improbably plotted as they are, bear more conclusively the master’s inspired stamp.

TFANA engaged no less a director than former RSC head Trevor Nunn to helm the production, and Nunn has applied many imaginative touches.

The plot -- narrated throughout by storyteller Gower (Raphael Nash Thompson) -- concerns the titular Prince of Tyre, played most commandingly by the excellent Christian Camargo, who sets out to woo the daughter (Sam Morales) of the King of Antioch (Earl Baker, Jr.) until he discovers that princess is having an incestuous affairs with her father.. For uncovering that sinful secret, Pericles incurs the wrath of the king and must temporarily abandon his own kingdom leaving it to his deputy Helicanus (an excellent Philip Casnoff) as the King’s assassins are out to get him.

After myriad travels and shipwrecks, Pericles falls in love with Thaisa (Gia Crovatin), the daughter of the King of Pentapolis (John Rothman), but she seemingly (only seemingly) dies at sea. Meanwhile, their young daughter Marina (Lilly Englert) is raised by Cleon (a solid Will Swenson), Governor of Tarsus, and his duplicitous wife Dionyza (Nina Hellman) who tries to kill Marina as the girl proves far more popular than her own daughter. But before that can happen, Marina is captured by pirates, and sold to a brothel, where she must fight to maintain her virtue.

As wild and wooly as the plot reads on paper, it actually builds to quite a wondrous climax that touches the heart. The recognition scenes between Pericles and his long-lost daughter, and later his wife, are quite magical, and Nunn has staged them for maximum impact. Pericles’ reverie as he succumbs to the “music of hte spheres” (dreaming of a vision of the Goddess Diana which ultimately leads him to Thaisa) is magically executed.

And those brothel scenes, as Pander (Oberon K.A. Adjepong), Bawd (Patrice Johnson Chevannes), and Boult (John Keating) try all manner of persuasion to get the steadfast Marina deflowered are strongly written and marvelously played here. During those scenes, about a dozen Moroccan-style chandeliers descend to composer Shaun Davey’s exotic music, providing just the right touch of decadent exoticism..

The character of Pericles is a bit of a cipher, but Camargo -- who has proven his Shakespearean chops on several occasions -- plays him beautifully, aging convincingly in the final scenes. Not all the performances are on his exalted level, but are certainly solid across the board. I did find Englert’s twee portrayal of the virtuous Marina rather odd, and the accent she affects here make some of her dialogue unintelligible.

Brian Brooks’ choreography enhances this tale with its unusual structure and its use, as Nunn explains in a program note, of “music, dance, [and] the mime of musically accompanied ‘dumb show.’

If you’ve never seen “Pericles,” you probably won’t see a finer production for some time to come.