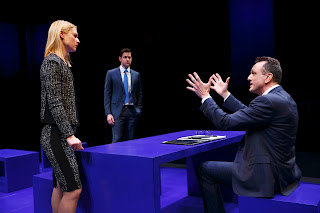 Though much of the financial chit-chat in this dramedy about a failing private equity firm’s duplicitous efforts to acquire a luggage company is as dry as the title (a term for cash reserves and other liquid assets, by the way), once the conflict really kicks in -- about midway through its intermission-less 100 or so minutes -- Sarah Burgess’s sharp satire on today’s coldly ruthless economic environment does finally grip.

The blue chip cast includes Hank Azaria as Rick, the hard-nosed head of the firm; John Krasinski and Claire Danes as Seth and Jenny, Rick’s perpetually bickering rival partners with vastly different methods, and Sanjit De Silva as Jeff, the perceptive luggage company CEO. All give sharp performances as they play out their machinations on designer Rachel Hauk’s richly blue playing area comprised of mostly cubes of varying sizes which double as desks, tables, bar stools, and the like.

The firm is in the midst of a PR disaster when its actions led to massive layoffs at a grocery chain, after which Rick had the insensitivity to throw a lavish (and well-publicized) engagement party for himself. The acquisition of this luggage company is poised to save the day. But Seth, who brokered the deal in the first place, and Jenny have polar opposite ways of how the deal will play out: with Seth aiming to be reasonably honest in his negotiations (albeit concealing his firm’s financial difficulties), and Jenny adopting a more pragmatic and downright ruthless approach.

The cast -- sharply decked out in Clint Ramos’ suited designs -- is well chosen. Danes, so good in Roundabout’s “Pygmalion” in 2007, proves again how confident a stage actress she is, and what a good comedienne, too. Krasinski, in his stage debut, is very adept at conveying his character’s growing desperation to push through the deal. And De Silva is especially fine as his character begins to discern that something’s amiss with the original plan.

The narrative and the comic barbs become sharper as the evening progresses, and most of the dense money talk becomes more comprehensible, too.

“Hamilton” director Thomas Kail keeps the action -- played in the round -- at as taut a pace as the sometimes talky script allows, and as noted, draws fine performances from his cast.