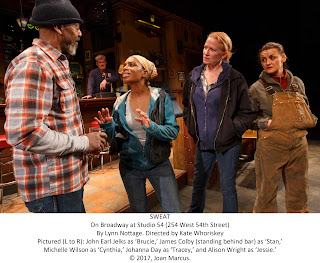 The Broadway transfer of Lynn Nottage’s powerful play about workers being edged out of the factory which has been their livelihood for generations makes for grippingly intense theater.

The play started life as a commission from Arena Stage and the Oregon Shakespeare Company where it premiered before its New York premiere at The Public here in November.

The setting is Reading, PA. It starts with the individual interrogations of two parolees in 2008, white Jason (an intense Will Pullen) and black Chris (Khris Davis), whose relationship to each other and whose specific crimes are not yet revealed. Officer Evan (Lance Codie Williams) goes from one to the other, and we learn they’ve apparently served time, and that there's some connection between them.

Then the clock rolls back to 2000 where we meet three women friends who hang out at a local bar. We learn Tracey (Johanna Day) is Jason’s mother, and Cynthia (Michelle Wilson) the mother of Chris. The third is their usually soused best friend Jessie (Alison Wright). They are all long-term workers at the factory, though Chris has aspirations of breaking the family mold, and going off to college to become a teacher. We learn that Jason and Chris were once, in fact, close friends.

The empathetic and pragmatic bartender is former factory worker Stan (James Colby) (whose foot was badly injured in a machine accident at the plant years ago), and he’s assisted by the Latino Oscar (Carlo Alban). Cynthia’s ne’er-do-well ex-husband Brucie (John Earl Jelks), whose life has somehow derailed, is a sometime habitue as well, hoping for a reconciliation with Cynthia ,and a handout from son Chris.

When Cynthia is promoted to a supervisory role, the delicate balance of the women’s friendship is upended, and when the factory starts to move out some of the machines, and there are rumors of downsizing, pay cuts, and additional hours, deep seated resentments and the ugliest of racial hatred bubble to the surface.

Performances are perfection across the board, and these characters are sharply drawn, taken as they were from interviews Nottage conducted in Reading. Tracey is particularly interesting; seemingly a good egg, but harboring a dangerous sense of entitlement when, in a superbly written and played scene, she learns that Oscar -- whom she deems an outside, though he’s native born -- is planning to apply for a job at her factory.

These people are locked into their routine, and though they may dream breaking away, as with Chris’ dream of a different career, and later, Jessie’s poignantly revealed regret that she never saw the world, they rarely take the necessary steps.

Character delineation aside, Nottage’s construction is extremely skillful and her the masterful way she lays out the chronology of events makes for a highly suspenseful evening.

Kate Whoriskey’s direction keeps the action taut, and at certain points, unbearably tense. Special kudos to U. Jonathan Toppo’s fight direction as there is some very convincing physical contact during the play’s brutal climax.

The play is unnervingly relevant to today’s political climate giving it even more potency. But contemporary parallels aside, this is just plain riveting theater, sure to be richly honored during the coming awards season.