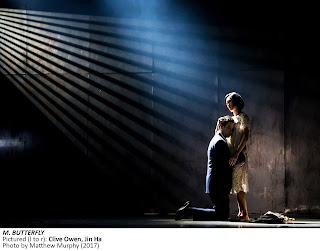 
Director Julie Taymor’s compelling revival of David Henry Hwang’s Tony winner (its first on Broadway) features two bravura performances that compare very favorably with our memories of the acclaimed originators John Lithgow and B.D. Wong as, respectively, Rene Gallimard, a French diplomat, and Song Liling, a cross-dressing Chinese opera singer (and actually a spy) with whom Gallimard carries on a decades-long affair, all the while believing the latter is a woman.

Here it’s Clive Owen and newcomer Jin Ha who take on these roles superbly, making them their own. Owen makes his character’s conflicting emotions completely plausible and the latter gives Song a convincing Continental allure.

Puccini’s 1904 “Madama Butterfly” – from which the title, of course, derives – runs through the narrative thematically, as it’s an opera that particularly inspired Gallimard from an early age. And its music is Song’s party piece.

Playwright David Henry Hwang has made changes in the text to emphasize the political backdrop, play up the East/West conflict, and giving us more backstory and details which clarify Gallimard’s seeming gullibility. For one thing, now Gallimard first believes Song is a man before being convinced otherwise. (Hwang’s plot derives from a real life story, but remains jaw-droppingly incredible.)

One might rather have expected Julie Taymor to go way over the top with her staging, but not so. Her work is restrained and apt throughout, showing sensitivity to the text. Visually, the Chinese opera performances and the Mao glorification parts are the most eye-filling, as is Ma Cong’s choreography for these sequences, but Taymor creates compelling stage pictures here.

Paul Steinberg’s sliding panel set (expertly lighted by Donald Holder) is spare when it needs to be, as in the opening scenes where Gallimard – in a jail cell for espionage – reveals how the disclosure of how he fell for Song’s ruse has made him a laughing stock, and opening up when appropriate. Constance Hoffman’s costumes, including Song’s chic outfits, are right on the money, too.

All the performances are satisfying, including Enid Graham as Gallimard’s stiff upper lip wife; Celeste Den as the scarily fierce Comrade Chin who makes sure Song stays loyal to the cause and doesn’t succumb to decadent Western  ways; Michel Countryman as Gallimard’s diplomatic superior who envies Gallimard his Chinese mistress when gossip of the affair reaches him; and Clea Alsip as a provocative student who comes onto Gallimard.


I hadn’t thought I needed to see “M. Butterfly” again, but Hwang’s revisions, Taymor’s vision, and the riveting performances make this an absorbing, often enthralling, experience all over again.
(Cort Theatre, 138 West 48th Street; Telecharge.com or 212-239-6200) Print this post
Posted by Harry Forbes at 3:26 PM