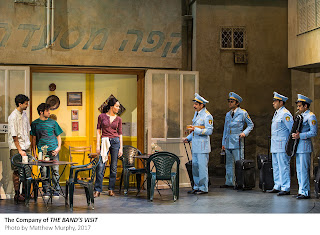 I missed David Yazbek’s new musical based on the acclaimed 2007 film about an Egyptian police band that accidentally goes to the wrong Israeli town (Bet Hatikva instead of Petah Tikva), on their way to a concert at an Arab Cultural Center, and their transformative interactions with the locals who offer them hospitality. But here it is on Broadway where it quickly establishes itself as one of the most distinguished musicals on the boards.


Constructed by Yazbek and book writer Itamar Moses with an admirable seriousness of purpose and directed by David Cromer with a pacing that often suggests a play with music rather than a full-out musical (and one not afraid of long silences either), the show brilliantly captures the quirky tone of the film. The result is an immensely moving experience and, in its way, as much a game changer in the musical landscape as “Hamilton.”


Yazbek’s score, which bears his familiar stamps of angular melodies and wacky but insightful lyrics, has the added dimension here of atmospherically Middle Eastern tonalities through the prism of Jamshied Sharifi’s gorgeous orchestrations (under Andrea Grody’s music direction and Dean Sharenow’s music coordination).


At times, the songs take on the dreamily jazzy flavor of Michel Legrand in his “Umbrellas of Cherbourg” and “Young Girls of Rochefort” vein. The hypnotically rhythmic “Waiting,” Dina’s paean to “Omar Sharif,” “The Beat of Your Heart,” “Haled’s Song About Love,” and “Answer Me” are among the standouts of a mesmerizing score.


The extraordinary cast, including Tony Shaloub, utterly transformed from his usual persona as Tewfiq, the head of the band, and Katrina Lenk as Dina, the kind restaurateur who offer the band refuge when they miss the last bus out of town, and with whom he develops a romantic if platonic bond. Everyone plays with a Middle Eastern accent which adds immeasurably to the verisimilitude.


Each of the characters in beautifully etched both in writing and performance. Tewfiq’s companion in Dina’s home is Haled (Ari’el Stachel), a romantically inclined musician with a penchant for Chet Baker. Another of their party, Simon (Alok Tewari), an oboist who has composed only the very beginning of a concerto, and violinist Camal (Geoge Abud) ends up at the home of a troubled young couple (Kristen Sieh and John Cariani) with a baby, and her widowed father (Andrew Polk).


There’s a young man (Adam Kantor)  pathetically hogging the public phone waiting for his girl to call. And Papi (Etai Benson), a shy young man who can’t connect with the girl he’s sweet on at a disco roller rink.


The themes of loneliness, disconnection, isolation, unrequited love, loss, regret, and the restorative power of music are all brilliantly conveyed without resorting to cliche.  The growing empathy between Tewfiq and Dina is beautifully played by Shalhoub and Lenk. Thematically, there are parallels to “Come From Away,” but this is oh, so much more subtle and nuanced.


Cromer and his company have been extraordinarily faithful to the film, keeping to the film’s structure and pacing even down to the running time (90 minutes, no intermission). Nothing seems forced, and the show breathes as naturally as life itself.


This is an altogether immensely moving, deeply affecting, and exquisite experience, and unlike anything else currently on the boards.

Print this post
Posted by Harry Forbes at 12:54 PM