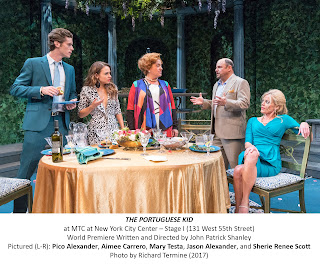 
There’s certainly nothing wrong with taking a break from more serious fare and penning a lighthearted comedy, but playwright John Patrick Shanley’s latest offering in that particular vein is trite, witless, and, for the most part, unfunny. And though it’s always a pleasure to watch those reliable pros Jason Alexander and Sherie Rene Scott, their roles on this occasion are simply not worthy of them.


The premise is this. He’s second-rate Rhode Island lawyer Barry Dragonetti, she’s a twice widowed wealthy Greek lady Atalanta Lagana who has always rather unaccountably had a yen for him, even calling out his name during love making with her husbands. He resents that her late husband used another lawyer for his business, but now Atalanta wants his help to sell their mansion.


They’ve known each other since childhood, and Atalanta had interceded when he was being mugged by an older boy he has assumed all these years was Portuguese, and thus sees that ethnicity in anyone who happens to be an adversary.


Both have opportunistic young partners. His is Patty (Aimee Carrero), his newly married Latina wife; hers is Freddie (Pico Alexander), a studly lawyer with a penchant for crude poetry. Patty and Freddie happen to be former lovers, and they’re attractively embodied by Carrero and Alexander.


Barry also has an overbearing mother (Mary Testa), the production’s brightest spot, not that her dialogue is any better than the rest. But her commanding delivery is priceless. Small matter that, in fact, Testa is younger than Alexander! As with Eileen Herlie playing mother Gertrude to Olivier’s “Hamlet” in the famous film, you’d never know. She despises Atalanta and the two get to trade plenty of insult humor.


I can’t say I chuckled more a few times, if that, and certainly most of the punchlines -- several tiresomely involving President Trump -- are pretty lame.


Pulitzer Prize-winner Shanley himself directs, but fails to make a persuasive case for his own work. Coming as it does right after his excellent autobiographical “Prodigal Son,” also at MTC, the contrast is rather staggering.