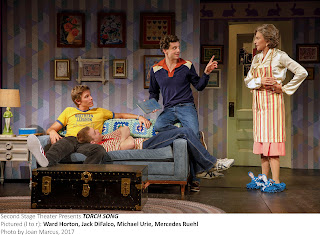 
No longer billed as “Torch Song Trilogy,” and discreetly abridged (not that you’d readily know it), while still retaining its basic triptych format (albeit in two acts), Harvey Fierstein’s award-winning and groundbreaking 1982 play receives a fine revival in Moisés Kaufman’s spot-on staging.


The first portion, set in 1971, charts Arnold’s head-over-heels encounter with the sexually conflicted Ed and their breakup six months later. The second (now 1974) is played on a giant bed (scenic design by David Zinn) and presents various pairings (sexual and conversational) among Arnold, Ed, Laurel and Alan. And the third and best revolves around Ma coming up from Florida in 1980 to visit Arnold in his New York apartment where one than one surprise await her. The no-holds-barred confrontation between Arnold and Ma in that act has lost none of its power to sting. In fact, period piece though this is, “Torch Song” plays far less dated than one might have predicted. its themes and conflicts still resonate.


At times, Urie can’t help but channeling Fierstein -- the dialogue, after all, bears the husky-voiced actor/author’s own cadences -- but Urie’s portrayal is very much his own, and his comic timing enhances many scenes, as for instance, when he mimes the antics of a salacious backroom bar encounter. Ruehl, for her part, has the perfect sardonic delivery, successfully navigates the fine line between loving and hateful mother, and considerably enlivens the third act in which Arnold, in the aftermath of tragedy, must finally come to terms with his future.


Horton is appealing believable in his spectacularly conflicted role while DiFalco brings a bracing edge to his part that undercuts any sentimentality.