Gettin’ the Band Back Together (Belasco Theatre) 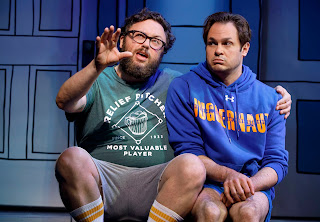 
This utterly derivative and downright mediocre musical concerns a 40-year-old stockbroker who loses his job, moves back in with his mother in Sayreville, New Jersey, reupping his high school rock band to compete with a (comically) thuggish real estate mogul who has foreclosed on his home.


Before the performance begins, a pitchman takes the stage to let us know that we’re about to see that rarity among Broadway musicals -- one with an original score -- but frankly that’s about the only thing original about it. This show makes the unfairly maligned “Escape to Margaritaville” look like “Sunday in the Park with George” by comparison.


The characters are a stereotypical bunch. They’ve given the stockbroker Mitch (affable Mitchell Jarvis) an arbitrary Greek heritage, so that the villain can get laughs mispronouncing the name Papadopoulos. His old school buddies and fellow Juggernaut bandmates include best friend Bart (Jay Klaitz), the obligatory comic, overweight sidekick who happens to be a math teacher with a dubious grasp of his subject; Sully (Paul Whitty), the cop who’s a total softie; and Robbie Patel (Manu Narayan), a dermatologist about to submit to an arranged marriage. None of them are happy in their chosen professions. When they learn their former lead guitarist has died, they recruit one of Bart’s failing math students Ricky (Sawyer Nunes) as a reluctant fill-in.


Mitch’s mom Sharon is pleasantly embodied by a still amazingly fit Marilu Henner on whom Bart has a rather icky crush.


Those original songs are tolerable but strictly generic, starting with Mitch’s paean to New Jersey.


The production team, from producer Ken Davenport on down, is composed of A-listers who have all seen better days. Derek McLane’s sets are, on this occasion, cartoon pop up rudimentary except for an elaborate diner setup in the second act, and the stage for the big showdown at the end is reasonably flashy. The team also includes Emily Rebholz (costumes), Ken Billington (lighting) and John Shivers (sound).


Davenport is credited with the book along with a conglomerate of actors (Klaitz among them) and writers who call themselves The Grundleshotz (“who helped develop... [the show] through a series of improvisational rehearsals”) and there’s “additional material” by Sarah Saltzberg.


At one point, the Juggernaut is engaged to play a Jewish wedding -- for no particular reason -- typical of the hodgepodge construction.


By the second act, I’ll admit I perked up during a number called “Life Without Parole,” at that point the best number of the show. This was followed by another relatively strong number called “Battle of Your Life,” and from then on, I went with the flow. But it was a case of too little too late. This is not a score I’d relish revisiting.


The theme of following your dreams rather than opting for the safe choice has been done to death, and as the premise here is so cartoonishly implausible, there’s nothing to give this particular variation an extra spark. It’s an amalgam of “The Full Monty,” “School of Rock,” and about a dozen other shows. The hard-working cast goes through its paces more than competently, and I particularly liked Tamika Lawrence as the sassy cop on whom Sully has a crush. Director John Rando was a natural choice for this sort of zany material, and he’s come up with some amusing bits of business throughout. Likewise, Chris Bailey’s choreography provides sporadic pleasure.


To give the devil his due, I will report that many in the audience seemed to be enjoying themselves, right through the routine standing ovation during the post-bows playout session. The band played well under Sonny Paladino’s music direction.


But for all its sporadic plusses, the show remains a peculiar choice for Broadway indeed.

(L-R) Jay Klaitz & Mitchell Jarvis
Brandon Williams (center) and the cast of Gettin' The Band Back Together Print this post
Posted by Harry Forbes at 6:07 AM