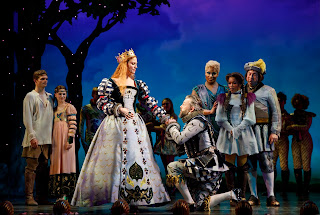 
The incongruous pairing of a story derived from Sir Philip Sidney’s 16th century novel “The Arcadia” and the pop hits of 1980s girl band The Go-Go’s was an audacious idea, and one that (surprise, surprise) really works. Credit Jeff Whitty who conceived the idea and penned the book, later adapted by James Magruder. The dialogue is often quite witty.


Originating at the Oregon Shakespeare Festival in 2015, the show has been smartly cast for New York, and sharply directed by Michael Mayer,


The story -- very freely adapted from the Sidney plot -- has King of Arcadia Basilius (Jeremy Kushner) and his viceroy Dametas (Tom Alan Robbins) visit Pythio, the Oracle of Delphi (Peppermint, said to be the first trans performer originating a lead on Broadway) where they hear dire predictions of the future including, most disturbingly, his eventual ouster as king. So he packs up his family -- wife Gynecia (Rachel York), elder daughter Pamela (Bonnie Milligan), and younger daughter Philoclea (Alexandra Socha) -- to abandon Arcadia and circumvent Pythia’s auguries.


Philoclea’s romance with childhood friend Musidorus, a dimwitted shepherd (Andrew Durand) is halted by the king before the family hits the road. Meanwhile, it is established that Pamela has no interest in the many suitors who come to court her. In fact, as we soon, learn, she has Sapphic leanings, though she doesn’t quite know it herself, but with which Dametas’ daughter Mopsa (Taylor Iman Jones) will soon help her get in touch. And when, at the injunction of Pythia, Musidorus is persuaded to disguise himself by donning female attire as a buxom blonde Amazon (quite a sight!), complications arise, as he ignites the passions of Basilius, Gynecia, and Pamela.


Shoehorned tinto this farcical situation are the Go-Go  hits (and also those from lead singer Belinda Carlisle) such as “We Got the Beat,” “Mad About You,” “Vacation,” and “Heaven is a Place on Earth.” Somehow it all gels.


The cast is terrific. Kushnier’s befuddled monarch; York’s imperious queen; Milligan the endearingly vain plus-size daughter (her “How Much More” temper tantrum as she tears a room apart is a hoot), Socha as the “plain” sister; Robbins as the obtuse viceroy, very appealing Jones as his spunky daughter, and Durand as the increasingly confused cross-dressing lad. His gender confusion as the king and queen alternately express their desire for him (“This Old Feeling”) is masterfully performed to Spencer Liff’s funny choreography. 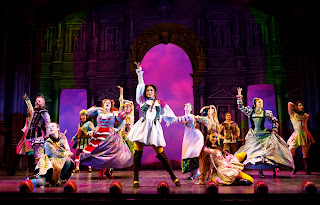 The moves that Liff has engineered for the game cast captures the 1980s vibe without distracting from the Whitty’s funny narrative. “Head Over Heels” plays teasingly with gender identity, but for all the belly laughs, never strays from its sincere advocacy of diversity and tolerance.


The vintage tunes, orchestrated and arranged by Tom Kitt, make an infectious earful, if not perhaps for Broadway purists.


Further plusses include the colorful sets and costumes by Julian Crouch and Arianne Phillips respectively, the clear and not too overpowering sound design by Kai Harada and the projection design by Andrew Lazarow.


So yes, technically “Head Over Heels” may fall under the vilified heading jukebox musical, but it’s done with such imagination and flair, it might just give the genre a good name.


Taylor Iman Jones as Mopsa (center) and the company
Print this post
Posted by Harry Forbes at 6:43 AM