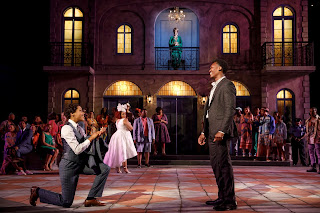 
The joyous, tuneful musical version of “Twelfth Night” was first done in 2016 for a mere five performances over the Labor Day weekend. It has now returned for a regular run following the Public’s first summer offering, “Othello.” But it closes Sunday, so if this review fires you up to see it, get thee to the Delacorte pronto.


I didn’t see the first outing, nor the other Public Works offerings that have run over Labor Day since 2013, and I could now kick myself for missing them, including last season’s “As You Like It,” if they were as good as this. “Twelfth Night,” conceived by Kwame Kwei-Armah (soon to be artistic director of the Young Vic in London) and Shaina Taub, who wrote the songs, alternates between keyboard and accordion, and plays the clown Feste, is a wondrous thing indeed. With Kwei-Armah tied up with his new gig in London, Public Artistic Director Oskar Eustis stepped up to direct on this occasion.


The leads are a mixture of pros and members of various community partnerships (including such groups as Brownsville Recreation Center, The Fortune Society, and Dreamyard), with the eye-poppingly large, and infectiously enthusiastic, ensemble drawn from the latter. Far from the hodge-podge that blend might indicate, the show is as slick as anything on Broadway, and in fact, would not be a bad prospect for a transfer.


Running for an efficient 100 minutes, without a break or a dull moment, Shakespeare’s play has been severely pared down, and the songs are, much like the ones in Galt MacDermot and John Guare’s “Two Gentlemen of Verona,” not exactly Shakespearian, though some use the Bard’s dialogue as a springboard for the lyrics. Thus, we have “If Music Be the Food of Love” and “Some Are Born Great.”


Nikki M. James is the very appealing Viola who dons male attire when she and her missing twin brother are shipwrecked at sea, and she’s washed ashore in Illyria to fend for herself. Charismatic Ato Blankson-Wood is Orsino who hires her to woo the grieving Countess Olivia (ample-figured Nanya-Akuki Goodrich) in mourning for her brother. As everyone knows, Olivia falls for Viola in her guise as “Cesario.” Meanwhile, Olivia’s servants -- Maria (Lori Brown-Niang), Sir Andrew (Daniel Hall) -- and uncle Sir Toby Belch (Shuler Hensley), all very funny, rather cruelly contrive to make the pompous steward Malvolio (Andrew Kober) believe Olivia is in love with him. When, ultimately, Viola’s twin Sebastian (Troy Anthony) appears, confusion ensues, especially for the kindly captain Antonio (Jonathan Jordan) who rescued Sebastian and loaned him his purse.


Throughout, Shakespeare’s structure and essence are totally respected, and ultimately you're left with the same satisfaction as having seen a traditional production. As such, this makes a fine introduction for Bard newbies, yet provides enough substance for buffs.


Taub’s jazzy, bluesy songs are all quite catchy. Orsino’s “Tell Her,” Viola’s “If You Were My Beloved,” (in pleasing counterpoint with Olivia and Orsino), “Is This Not Love?,” Toby’s “What Kinda Man R U Gonna Be?” and the rest all delight and they’re all aptly placed. This isn’t the first musical of “Twelfth Night” -- I recall the Off-Broadway “Your Own Thing” fondly, to name one -- but it’s surely one of the best.


Choreographer Lorin Latarro pulls out all the stops on the “Count Malvolio” number which builds in “A Chorus Line” fashion with seemingly a cast of thousands. (The ensemble, incidentally, alternates between “red” and “blue” casts; mine was the latter.) And her work is highly imaginative throughout.


The whole has been poetically staged by Eustis and Kwei-Armah, interweaving some signing for the deaf most gracefully.


(The Delacorte Theater in Central Park, 81st Street and Central Park West or at 79th Street and Fifth Avenue; free ticket distribution or call 212-967-7555 for more information, or visit www.publictheater.org; through August 19)