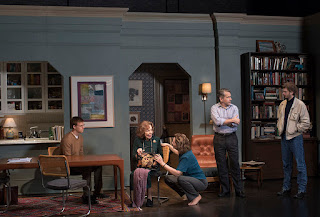 
This fine revival of Kenneth Lonergan’s 2001 memory play (a finalist for the Pulitzer Prize), which won acclaim for star Eileen Heckart, now features a superb performance by veteran Elaine May as the spirited grandmother, once a lawyer and social activist, gradually succumbing to Alzheimer’s disease.


Though that precis on paper may sound like heavy going, the tone is, in fact, predominantly light-hearted. a bittersweet underpinning notwithstanding.


Gladys Green (May) is the owner of the titular Greenwich Village gallery which, we learn, has seen better days. The owner of the hotel in which the gallery is housed is poised to reclaim the space for conversion into a breakfast room. Now, as her condition worsens by degrees, she exasperates her family with her constant repetition, forgetfulness, and hearing difficulties, but their devotion is never in doubt. These include her loving but stretched-to-the-limit daughter Ellen (Joan Allen), son-in-law Howard (David Cromer) with a penchant for saying the wrong thing, and compassionate grandson Daniel (Lucas Hedges), who also serves as narrator.


When Gladys is visited by Don, a sweet-natured if clueless Boston artist who’s been living in his car, she offers him a cot in the gallery, and allows him to mount his pictures there. (He’s played in nicely understated fashion by an almost unrecognizable Michael Cera in another memorable Lonergan portrayal after last season’s “Lobby Hero”)

The family, at first concerned that she has invited in a total stranger, comes to accept him, and they allow the arrangement. But as scene by scene, she declines (and May brilliantly delineates each stage of that decline), they worry how they’ll be able to take care of her. Daniel lives down the hall from her and her frequent ringing of his doorbell in her confusion is driving him the breaking point.


What makes the play so especially poignant is Gladys’ extraordinary likability, especially as embodied by the winning May. With her patently lovable nature, it’s easy to see why the family puts up with her. And it should be said that though May is only a year behind Gladys’ stated age of 87, she is totally on top of a role that must be especially tricky to learn with its constant repetition and overlapping dialogue.


Hedges is very appealing, and like Cera, has proven his chops with Lonergan dialogue (“Manchester By the Sea”). Allen skillfully conveys her devotion, even at the most trying times.


Lonergan deftly mixes humor and sentiment in a most skillful way. The end is incredibly moving, and will affect anyone who’s experienced a similar situation with an aging parent. A young woman behind me could barely stifle her sobs.


Lila Neugebauer directs the delicate material with a sure hand and elicits well judged performances from her ensemble. But it’s May’s return to the stage that is the cause of greatest celebration, ironically at the very theater where she and her comedy partner Mike Nichols wowed everyone decades ago in “An Evening with Mike Nichols and Elaine May.”

Photo: Brigitte Lacombe
Print this post
Posted by Harry Forbes at 11:17 AM