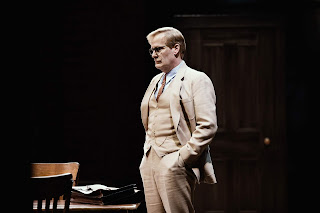 
The legal tussle between the Harper Lee estate and playwright Aaron Sorkin was well publicized last year, and it seems concessions were made before the case was finally settled out of court. But despite the behind-the-scenes friction, what has ultimately emerged is an extraordinarily fine and absorbing evening of theater.


Like the book and 1962 movie, the play is an outstanding artistic triumph in its own right.


Sorkin has restructured the narrative, including some tweaking of the chronology. For instance, we learn right from the start of the death of redneck villain Bob Ewell (played to the vicious hilt by Frederick Weller), and the rape trial of innocent black man Tom Robinson (Gbenga Akinnagbe) begins almost at the start. This works beautifully from a dramatic standpoint, and one is riveted within minutes.


Jeff Daniels’ Atticus Finch is not quite the noble hero of the book and movie (the latter so memorably embodied by Gregory Peck in his Oscar-winning role), but he’s still that admirably principled man standing up for what he believes to be right. In Sorkin’s telling, however, not only his children -- daughter Scout (Celia Keenan-Bolger) and Jem (Will Pullen) -- but also his longtime housekeeper Calpurnia (LaTanya Richardson Jackson), can’t always understand the steadfast insistence on civility, and speak their minds. Calpurnia’s outspoken criticism -- not necessarily an action that would have been ventured by a housekeeper in this particular time and place (1934 Maycomb, Alabama) -- was one of the revisions about which Sorkin was adamant remain. The result is satisfying for a contemporary audience without, arguably, unduly betraying the source material.


Daniels, in a predictably great performance, makes the character his own, no small feat in light of Peck’s beloved identification with this role, and my only issues were, at times, to do with audibility, perhaps having to do with his Southern accent, or maybe just fatigue the night of my performance. He seems less warmly paternal than Peck played him in the film, but the tenderness shows itself at key points, as he puts his arm around Scout and Dill.


The actors are, in fact, quite superb all around. Casting the children with adults (and, mind you, the boys are tall), including endearing Gideon Glick as the Finch children’s eternal optimist friend Dill (his character based on Lee’s childhood pal, Truman Capote), works just fine. For her part, Keenan-Bolger could almost pass for a child physically, but it’s her childlike exuberance that makes her so convincing. And her narrative of events, shared with the others, keeps one squarely attuned to their impressionable perspective all evening.


Erin Wilhelmi as his daughter Mayella demonstrates vividly how much she is her father’s daughter particularly in a witness stand outburst that is frightening in its ferocity. The rest of the time, she’s a tightly coiled rabbit cowering at her table with smarmy prosecutor Horace Gilmer (Stark Sands).


Dakin Matthews is most amusing as the presiding judge, providing some brief moments of levity, and there’s good work too from Danny McCarthy as Sheriff Tate. Neal Huff gives a particularly wonderful performance at witness Link Deas, the “town drunk.” And his revelatory follow-up scene with the children is genuinely heart wrenching.


As the accused Tom Robinson, a role, like Calpurnia’s, built up from the novel to give the character more agency, Akinnagbe shows great dignity. Phyllis Somerville has a choice cameo as the Finch’s mean-spirited old lady neighbor. And Danny Wolohan does well with two roles: a conscience-stricken Klansman and later, the mysterious talked-about neighbor, Boo Radley.


Bartlett Sher, who has proven adept at period Americana with “Golden Boy,” “Awake and Sing!” and “Joe Turner’s Come and Gone,” orchestrates everything with a beautifully assured hand. He keeps the action taut and, as stated, has elicited exceptionally fine work from his cast.

Photo by Julieta Cervantes: Jeff Daniels
Print this post
Posted by Harry Forbes at 7:59 AM