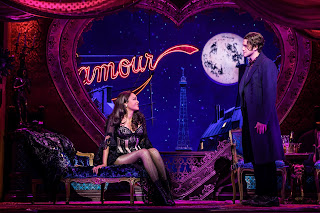 
Here’s a visually sumptuous, skillfully realized stage version of the 2001 Baz Luhrmann film, as stunning in its theatrical way as the film, which tells the story of a doomed romance between a glamorous courtesan Satine headlining at the Moulin Rouge cabaret and Christian, a struggling writer who has come to Montmartre in 1899 to pursue the ideals of “truth, beauty, freedom, and love.”


The film anachronistically used then-present-day pop hits as its soundtrack, and the romantic scenes apart, took a Monty Python-ish slapstick tone for the rest.


The plot unfolds mostly as before. Montmartre newbie Christian (Aaron Tveit) has come to Paris hoping to be the “voice of the Revolution”, but under the influence of his new pals Toulouse-Lautrec (Sahr Ngaujah) and Santiago (Ricky Rojas) gets roped into writing a new show for the Moulin Rouge club run by impresario Harold Zidler (Danny Burstein). There, it’s love at first sight when Christian lays eyes on glamorous headliner Satine (Karen Olivo), a doomed courtesan expected to become the mistress of the club’s patron The Duke of Monmouth (Tam Mutu).


In the film, Nicole Kidman and Ewan McGregor were the handsome leads, Jim Broadbent was proprietor Zidler, and Richard Roxburgh the predatory Duke of Monroth.


Aaron Tveit seems to me a rather less tortured and vulnerable hero than McGregor, and Karen Olivo a more robust Satine than Kidman’s delicate heroine, and she has more feminist agency here than Kidman’s character. For one thing, she’s well aware of her own illness, whereas in the film, only her entourage knew the severity of her consumption, but not she. Certainly Tveit and Olivo trump their film counterparts in the vocal department, though Kidman and McGregor had more palpable chemistry.


Though the cast is uniformly accomplished, Danny Burstein nearly steals the show in a turn that owes nothing to Jim Broadbent’s original, and he plays the part more sympathetically. His versatility is quite exceptional, when you think of his previous finely etched portrayals such as Luther Billis in "South Pacific" and Tevye in "Fiddler on the Roof."


Book writer John Logan (Tony winner for “Red”) remains generally faithful to the original bittersweet screenplay, with its elements of “La Boheme” and “La Traviata,” but has tweaked several plot elements and streamlined the action.


This result -- expertly directed by Alex Timbers -- is every bit as exuberant as the film, but he and Logan have toned down the knockabout farce. The film’s climax, for instance, with the Duke’s henchman trying to knock off Christian as he declares his love for Satine during a performance has been scuttled. Christian is here a composer, not a writer, and he’s American, not Engish. Satine’s rival at the club Nini who, in the film, maliciously spilled the beans about Satine’s affair with Christian, now warns Satine of the Duke’s violent nature because, after all, “we’re sisters.” She’s well played by Robyn Hurder, and also enjoys a sexy, showstopping tango with Rojas.


Her blatantly sexual colleagues at the club are exuberantly taken by Jaqueline B. Arnold (La Chocolat), Holly James (Arabia), and Jeigh Madjus (Baby Doll). The Duke now has more of a role in shaping the show he’s bankrolling at the club. He also wants Satine to give up performing, whereas in the film, he’s offering to help her acting career. Toulouse-Lautrec is a rather more serious-minded character here.


Nearly all the familiar songs from the film -- “Your Song,’ “Lady Marmalade,” “Nature Boy,” “Diamonds are a Girl’s Best Friend,” and so on -- are reprised, along with many newer one like “Single Ladies,” “Rolling in the Deep” and “Firework”  The show’s concept -- like the movie -- still strikes me as more than a little sophomoric, but Logan’s changes have overall made the story that much more cohesive.


Derek McLane’s eye-popping set -- not dissimilar to that of “Natasha and Pierre and the Great Comet of 1812” in both its plush crimson hues and fourth wall bursting ambience -- is dominated by a giant Moulin Rouge sign, heart cutouts, and Satine’s elephant, and the cabaret impressively gives way to other Parisian locales. Catherine Zuber’s costumes -- corsets and tailcoats abound  -- are appropriately dazzling as befits the Belle Epoque setting.


Sonya Tayeh’s choreography is wonderfully inventive and flavorful -- especially in the great second act “Bad Romance” opener -- and as with the other elements, builds on the film, from the can-can numbers to Satine’s “Diamonds” entrance made. As in the film, Satine sings it as she descends from the rafters. (I liked prefacing the “Gentlemen Prefer Blondes” song with “Diamonds are Forever,” well performed by Olivo.)


Despite the rock/pop purview of the score, Peter Hylenski’s sound design manages to be admirably clear and well-balanced.


Justine Levine is credited with music supervision, orchestrations, arrangements and additional lyrics, and has done a masterful job of making the disparate songs -- over 70 in all -- a cohesive whole.


The audience at my performance was wildly enthusiastic right up until the obligatory post-curtain call dance reprise.