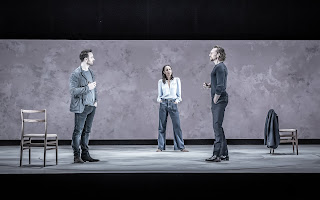 
Here’s a splendidly staged, beautifully nuanced version of one of Harold Pinter’s most accessible plays, which, frankly, is much superior to the last revival, even though that one was directed by the great Mike Nichols, and starred the excellent Daniel Craig, Rachel Weisz, and Rafe Spall.


Director Jamie Lloyd’s production -- first seen at the Pinter at the Pinter season in London -- is so spare, one might almost, at first glance, take this for a rehearsal or, at best, a staged reading, but all the better to enjoy Pinter’s wordplay. And the action is, in fact, meticulously orchestrated. Designer Soutra Gilmour has provided only the most essential props on a turntable with a white canvas background framing the action, and sometimes strikingly catching the shadows of the three very fine leads. Strips of light hover above. (Jon Clark designed the dramatically apt lighting.)


The play charts the adulterous affair between literary agent Jerry (Charlie Cox) and gallery owner Emma (Zawe Ashton) who’s married to Jerry’s best friend, publisher Robert (Tom Hiddleston), and tells the tale in reverse from post-breakup to Jerry’s first bold flirtation with Emma. (Pinter is said to have based the play on his own adulterous affair with journalist Joan Bakewell.) Time projections on the set tell us where we are, chronology-wise: “two years earlier” or “later” (as there are some scenes that sequentially follow the one preceding).


Lloyd and cast bring out all the humor of the piece, particularly in the early scenes, and it’s surprising to be reminded how much amusing dialogue there is. Critic John Simon, reviewing the original Broadway production, recognized similarities to Noel Coward, though he found it “second-rate Coward.” In the hands of Hiddleston, Cox and Ashton, I’d say the deprecating hyphenate would be misapplied. There is genuine wit here.


And there’s also considerable poignancy which comes through movingly, particularly in the play’s final scene, thanks to Lloyd and crew’s sensitive handling.


The original cast -- Daniel Massey, Michael Gambon, and Penelope Wilton -- at London’s National Theatre was, I always thought, definitive, not forgetting the excellent 1983 film with Jeremy Irons, Ben Kingsley, and Patricia Hodge, but the present cast very much lives up to my memories of the creators. The rarely screened film, incidentally, is available on YouTube, and makes for a fascinating comparison with the current production.


Ben and Max Ringham’s sound and music add to the deft mood setting.