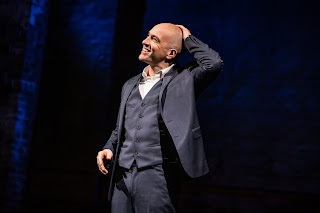 
What a splendid entertainment this is! Of all the mentalists you may have seen before, Olivier Award-winning author and UK TV personality Derren Brown’s particular brand of wizardry is in a class by itself. His tricks -- and it almost pains me to characterize them with such a prosaic word -- are mind boggling, and will have you wondering how he could possibly have accomplished them.


With seeming transparency, Brown explains the science behind the psychological manipulation that anchors his act. He demonstrates this right at the start with a young lady from the audience whom he asks to hold a $20 bill in one of her hands, and over and over again, pretty unerringly declares with accuracy which hand holds the bill.


The second act, wherein he discerns sealed questions from the audience with the same astounding accuracy, performs the same stunt blindfolded, and then asks the audience members to telepathically transmit questions to him are, again, extraordinarily successful. He insists there are no plants in the audience, and when he articulates what certain audience members are thinking or concealing, the look of genuine astonishment or deep embarrassment on their faces says it all. (A roving camcorder comes in close so we can all see this for ourselves.)


In a couple of instances, Brown briefly puts his subjects to sleep through hypnosis, and they would seem to be genuinely under his spell. I overheard one remarking in befuddlement to his companion on leaving the theater, “I don’t know...when I got up on that stage, it was like I was in a trance.”


Brown emphasizes several times that he’s not a psychic or mind-reader and then, of course, proceeds to demonstrate skills that would seem to prove quite the contrary.


Brown doesn’t get around to explaining the title of the show till the end of the second act, but when he does, it’s a doozy. He does begin the show, however, with a confession that when he was younger, his own personal secret was that he was gay, and he didn’t come out till he was 31. But the biographical revelations pretty much stops there. As he explains, everyone constructs a “story” that informs his or her life, and that statement is more or less the theme of the evening.


If case you were wondering, you needn’t be fearful of enforced participation. Unless perhaps you allow your photo to be taken upon entry to the theater or if you catch one of the frisbees Brown throws into the audience when he’s trolling for volunteers, and even so, he sometimes explains that he’s only looking for men or women of a certain demographic.


He’s got quite a compelling personality, full of charisma. And his gentle ribbing of the audience at times sometimes put me amusingly in mind of Barry Humphries in his Dame Edna mode.


At the start of the show, Brown enjoins reviewers not to talk about the show in any detail, so perhaps even now, I’ve said too much.


This isn’t one of those 80 minutes without an interval shows you might expect from a one-person show; it’s a satisfyingly full two-and-a-half hours with intermission.


Though I didn’t catch the show during its Drama Desk-winning engagement last spring at the Atlantic Theatre Company’s intimate venue, I can attest to how superbly it plays in the larger venue of the Cort Theatre.


“Derren Brown: Secret” was co-written (and very cleverly so) by Brown, Andrew Nyman and Andrew O’Connor. The latter two also co-directed the show which, make no mistake, is as grandly theatrical and emotionally potent as anything currently on the boards on or off Broadway.