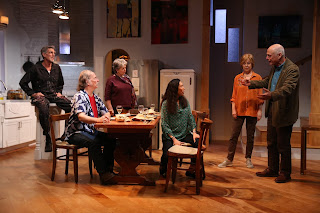 
Three couples -- lifelong friends -- come together at a well-appointed upstate New York farmhouse for dinner and conviviality and ponder the notion that they might all live there, commune-style, to care for each other in their declining years. All are enthused about the idea except for one who believes they’ll grow tired of each other in such close proximity.


This would seem to be the principal, if not especially riveting, conflict of the play until, that is, a revelation about the naysayer’s infidelity, one which then shifts the focus to whether or not his wife will or will not forgive him.


“Fern Hill” was developed at the 2017 Eugene O’Neill Theater Center’s National Playwright’s Conference and received its world premiere at the New Jersey Repertory Company -- with some of the current cast -- last year, receiving generally respectable reviews.


Jill Eikenberry and Mark Blum are the farmhouse couple Sunny and Jer, she a budding artist, he a writer and teacher. They are among the A-listers who make up the present cast, which also includes Mark Linn-Baker and Jodi Long as aging rocker Billy and wife Michiko, and John Glover and Ellen Parker as artist Vincent and photographer-wife Darla. They’re all pros to be sure, and their stage savvy goes a long way towards making actor-author Michael Tucker’s comedy-drama pleasantly tolerable.


The group -- all artists or academics -- has gathered ostensibly to celebrate the husbands’ respective birthdays: Billy is 60, Jer 70, and Vincent 80.This is the sort of setup with which Alan Ayckbourn in his heyday might have had a field day. But Tucker’s text elicits, at best, only mild chuckles (many courtesy of Linn-Baker’s wise-cracking Billy) when it’s not dealing with infidelities, aging sex lives, and the bounds of friendship.


Mostly, though, there’s just a lot of meandering chatter, congenial enough certainly but hardly enough to hang a play on. We do like these characters, except perhaps for the self-absorbed Jer who, we are told, used to be “adorable” in Sunny’s eyes. But, as written, he certainly seems anything but, apart from his sympathetic ministrations to Vincent after the latter’s hip replacement.


There are several observant scenes such as a nicely written and played exchange between Sunny and Vincent who finds it difficult to talk about intimacy. But for the most part, there’s a static quality and not much more depth than average TV fare.


The cast, as noted, is a definite plus. Eikenberry is nicely sympathetic, though her character’s tolerance of Jer, something of a head-scratcher. Glover is masterful as always. And Long is an especially bright presence.


Nadia Tass’ naturalistic direction anchors the proceedings in something approximating a believable reality.