The Height of the Storm (Manhattan Theatre Club) 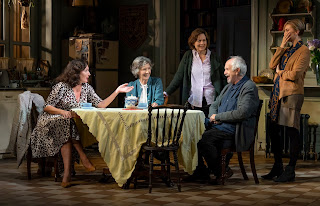 
If it’s by French playwright Florian Zeller, there's a pretty good chance that the subject matter will have something to do with dementia. What continues to amaze, however, is how much substantive material he has been able to mine from that singular subject.


So here we have something of a companion piece to the first of his plays to come to these shores, “The Father,” in which Frank Langella gave such a memorable performance as the titular character André also courtesy of Manhattan Theatre Club.


Once more, we have a central male character, again named André, and again a distinguished writer, but now in a state of pitiable befuddlement and terror, sadly out of touch with reality. Apart from his wife Madeleine (superbly wry  Eileen Atkins) -- forever cooking André’s beloved mushrooms from their garden -- and daughters, dedicated if bossy Anne (Amanda Drew) and less committed Elise (Lisa O’Hare), he's utterly confused about the other characters in the play, identified as only The Woman (Lucy Cohu) and The Man (James Hillier).


We’re not even sure, of course, if all the family members are alive, at least not at first, but there are clues along the way, including flowers that would appear to have mysteriously arrived without a card. Is their purpose celebratory or condolatory? What does seem clear is that André is not able to live alone in the beautiful country house “somewhere not far from Paris” where he and his wife of 50 years have lived comfortably for so long, and Anne has somehow been entrusted with sorting out his papers and diary.


Anthony Ward’s high-ceilinged and meticulously detailed kitchen/library set, stunningly lit by Hugh Vanstone, makes the place look as idyllic as you can imagine. Besides accurately suggesting the various times of day, Vanstone’s lighting tellingly helps delineate -- up to a point -- the scenes that are real from those that may not be. There seem to be plans afoot to move André to a place where he’ll be looked after.


The agent of that move might be The Woman (whose persona seems to morph from former flame of André to real estate agent) or The Man (Elise’s rather callous fiance and seemingly an estate agent himself).


When the Pinteresque play begins, it is the morning after a fierce storm, which in a literal sense, gives the play its title. Translated like all the previous Zeller works here by English playwright Christopher Hampton, it was done last year at Wyndham’s Theatre in London and has come with its superb cast almost intact, O’Hare being the Broadway newbie, but she fits in seamlessly.
Jonathan Kent’s direction of the play with its ever shifting narrative and time frame could not be more stunningly calibrated, and for all the ambiguity and overall tone of melancholy, the final moments of the play are tremendously moving.


Pryce is tremendous, ranting and raving, his frustration at not understanding, heartbreakingly real, especially as we can see his former stance was highly authoritarian. HIs pathetic repetition of “What is my position here?” in one speech -- powerfully delivered by Pryce -- has something of ring of Lear’s repeated use of “never.” And indeed there are obvious parallels to “King Lear” in this play. Atkins plays Madeleine as a pillar of common sense fortitude.
The play runs 80 minutes without an interval.
Samuel J. Friedman Theatre, 261 West 47th Street; 212-239-6200 or manhattantheatreclub.com.
Photo by Joan Marcus:  (l-r) Lucy Cohu, Eileen Atkins, Amanda Drew, Jonathan Pryce, Lisa O’Hare.
Print this post
Posted by Harry Forbes at 12:12 PM