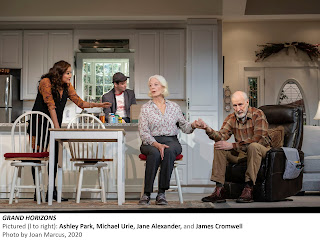 
Despite its superficially sitcom veneer, “Grand Horizons” is, beneath the copious laughs, a surprisingly perceptive and insightful work about relationships, family, aging, life choices, and the nature of love. Bess Wohl’s throwback comedy also offers terrific opportunities for its cast, all of whom rise superbly to the occasion.


For starters, Jane Alexander gives one of the best performances of her long and distinguished careers. She plays Nancy, wife of 50 years to the taciturn Bill (equally masterful James Cromwell) who nurses dreams of becoming a stand-up comedian. They are now living in an independent living senior community, the titular Grand Horizons.


Over breakfast one morning, Nancy placidly announces she wants a divorce. Bill acquiesces without further batting an eye. But when the news gets out, their two grown sons -- Ben (Ben McKenzie), a lawyer, and Brian (Michael Urie), a high school drama teacher immersed in a production of “The Crucible” with an improbable cast of 200 -- are apoplectic at the thought of the impending breakup. They promptly descend on their parents’ abode for an intervention to sort out what they view as an impossibility. Ben’s expectant wife Jess (Ashley Park) is a therapist ever on the ready to offer her professional advice.


Ben is gruff and is aggressively impatient for the parents to see reason; Brian is self-centered and emotionally overwrought, frequently on the verge of tears. He’s just getting out of a failed relationship, and at one point, while everyone is asleep upstairs, he even brings home a randy pickup (amusing Maulik Pancholy) who even on short acquaintance, soon gleans Brian’s inherent selfishness. Later, Urie’s rising hysteria as he hears more of the sordid details that led to his mother’s decision is hilariously conveyed. In fact, all the interactions between Alexander and Urie are special. as for instance, when she reveals his father has “something on the side.”


As indicated, the play is worth catching for Alexander alone who demonstrates peerless comic timing, while giving a genuinely feeling performance. Wonderfully poised even when saying the most surprising or outrageous things, her beautifully dry, unflappable delivery is masterful.


Priscilla Lopez brightens the second act as Bill’s lady friend Carla, a dental office receptionist from the adjoining Vista View community, whom Bill has met in his stand-up comedy class.


There’s satisfying chemistry between all the actors, incuding McKenzie and Park who expertly limn their troubled-beneath-the-surface relationship, and Park proves yet again what a fine comedienne she is.


Many have seen parallels to Neil Simon in the play, but I think there’s a closer stylistic parallel to English playwright Alan Ayckbourn. Wohl’s themes here, underneath the bellylaughs, are quite profound, and the emotions are never less than real.