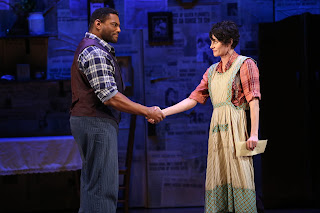 
As an avowed purist when it comes to musicals, I approached this revamp of Meredith Willson’s 1960 follow-up to “The Music Man” with some trepidation. The program’s song list of so many unfamiliar titles not from the original show, as well as a lobby note proclaiming that only three lines of spoken dialogue from Richard Morris’ original book remained, did not bode well.


But if I had a hat, I’d eat it, for this is one revisal that really works. The 1960 stage show, and the MGM film which followed, have their virtues, but the score is admittedly several notches below that of Willson’s masterwork. Even MGM retained only a handful of the show’s songs and used others as background scoring.


So, too, Morris’ plotline was inspired by the legend rather than the actual facts of Margaret Tobin Brown, a remarkable lady who, beyond her heroic actions on a Titanic lifeboat, was a political and labor activist, an advocate for juvenile justice, and a suffragette. She even ran for Congress.


Now Dick Scanlan, who did such a fine job in adapting the “Thoroughly Modern Millie” movie into a solid stage piece, has crafted a savvy adaptation shoehorning Willson’s score into a tale closer to the real story. His script begins with Molly (Beth Malone) testifying at the U.S. Capitol about her heroic experiences on board the Titanic, and then flashes back to the teenage Molly hellbent on getting to Denver, her dream city, though only getting as far as the mining town of Leadville where she’s sensibly dissuaded by the miners there from continuing the dangerous journey over snowy mountains.


In short order, she meets J.J. (called “Leadville” Johnny in the original) Brown (David Aron Damane) with whom she develops a sparring relationship. J.J.’s buddies in the mine are an international bunch: the German Erich (Alex Gibson), the Italian Vincenzo (Omar Lopez-Cepero), and the Chinese Arthur (Paolo Montalban).


When a miner is killed in an accident, Molly befriends his widow Julia (lovely voiced Whitney Bashor) who teaches her to read and gives her a little polish. (Shades of Doris Day’s “Calamity Jane” getting cleaned up by Allyn Ann McLerie in the film of that name!)


Eventually, to her surprise, J.J. proclaims his love for her, offering her the items she’s previously declared she desires so desperately -- a red silk dress and a big brass bed -- she lowers her defenses and accepts. When J.J. discovers a way to mine gold -- after the bottom drops out of the silver market -- he becomes a partner with mine owner Horace Tabor (Michael Halling) whose wife Baby Doe Tabor (Nikka Graff Lanzarone) is the real power behind the man, underscoring, as with the reversioning of Molly herself, the feminist slant of this version.


When they finally move to Denver, Molly is initially snubbed for the society folks headed by Louise Sneed-Hill (amusing Paula Leggett Chase who also doubles as a sexy dance hall girl). Later Molly clashes with J.J. over the miners’ desire to unionize, and marital woes disrupt their loving relationship.


The cast is uniformly excellent, including Coco Smith as the Browns’ sassy Denver maid.


Scanlan’s script includes plenty of themes with contemporary political relevance, but some talkiness excepted, none of this is too heavy-handed, and for all the revision, the general narrative arc parallels the original property.


The show’s playlist comprises several of the show’s songs such as “I Ain’t Down Yet,” “Belly Up to the Bar, Boys” and “I’ll Never Say No,” one from the film (“He’s My Friend”), and other Willson material that Scanlan has adapted, deftly fitting the tunes to new lyrics. The resulting mix is, arguably, stronger than the original.


The dynamic and tireless Malone makes a strong-voiced, dramatically apt Molly and baritone David Aron Damane a warm and very human J.J. The pair have real chemistry, a winning example of diverse casting.


This revisal has been kicking around for a decade, so it’s no wonder that the show feels as slick as it does. It was developed at the Colorado New Play Summit and produced at the Denver Center Theatre Company (with Kerry O’Malley and Marc Kudisch) with a further developmental production at The Muny in St. Louis. (Sutton Foster, Craig Bierko, and Burke Moses have also been involved with the project in readings and earlier productions.)


Everything about the production is first rate. Kathleen Marshall has directed and choreographed with her customary skill, and the dancing is wonderful from the rambunctious miner dancing to the saloon girls to the upper crust waltzing couples of the second act.


Brett Banakis’ scenic design, warmly lighted by Peter Kaczorowski, includes a striking back wall of vintage newspaper clippings in the first act. Sky Switser’s costumes are attractively period affairs, with gowns for Beth Malone by Paul Tazewell. Walter Trarbach’s sound design seemed a bit overloaded at the start of the performance but eventually settled down to a good level. And the expert musical direction is by Joey Chancey with Larry Hochman’s excellent orchestrations.


The whole has a ready-for-Broadway feel, but as there’s no telling that will happen, I enthusiastically recommended making the trip downtown. This “Molly” is not to be missed.


Photo by Carol Rosegg: Pictured (L to R): David Aron Damane and Beth Malone
Print this post
Posted by Harry Forbes at 7:41 AM