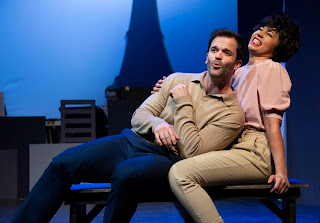 
This 1962 musical was innovative in a number of ways: a biracial romance between the characters played by Diahann Carroll and Richard Kiley; a highly stylized presentation with the musicians not in the pit, but offstage in the wings; only woodwinds, brass, harp and percussion as the punning title suggests; and the first and only Broadway score for which composer Richard Rodgers supplied both music and lyrics. This last was necessitated by the death of his longtime collaborator Oscar Hammerstein II after ‘The Sound of Music.”


Rodgers had already tried out his lyric writing skill in some new numbers for the remake of “State Fair” the year before, and would go on to do likewise for the TV musical “Androcles and the Lion” and the added songs in the film version of “The Sound of Music.” But thereafter, he sought the less stressful arrangement of working with a lyricist.


The show ran for 580 performances, and a successful London production starred Beverly Todd and Art Lund.


Inevitably, the romance is not without conflict. David needs to be back in Maine to concentrate on his writing far away from frivolous Gallic distractions, and Barbara thrives on her life as a high fashion model. The subject of race is never articulated, and with biracial romances currently such a non-issue, contemporary audiences may assume that it is incompatibility alone that scuttles the happy ending. (For the record, both Kiley and Carroll lobbied strenuously for an alternative wrap-up.)


Director/Choreographer Diedre Goodwin makes a good stab at capturing the stylish staging of director Joe Layton’s original as well as can be expected on the modest Theatre Row stage, though the conceit of the couple walking through a couple of curtained arches on Ryan J. Douglas’ minimalist set -- lighted by Ethan Steimel -- as if through the streets of Paris wears a little thin. (An image of the Eiffel Tower serves as the obvious but appropriate backdrop.)

Right from the start, when she enters singing the show’s breakout hit, “The Sweetest Sounds,” Knight is remarkably successful in capturing the Diahann Carroll look and even the timbre of her voice except perhaps in the less comfortable upper registers. In Luc’s studio, she strikes convincing model poses, too. And Bond proves a solid leading man with acting chops and a virile voice. The two play well together, even though the dialogue scenes tend to drag.


True to the original conceit, there are no strings in Music Director Grant Strom’s reduced orchestrations. He is accompanied on piano by Dan Monte on percussion and Schuyler Thornton on flute.


Rodgers wrote one of his most melodic latter-day scores, and showed himself a lyricist closer to the sophisticated sensibilities of his first partner Lorenz Hart (though without the latter’s special genius), and one can also discern similarities to the more hard-nosed Hammerstein sentiments of “How Can Love Survive” and “No Way to Stop It” from the stage score of “The Sound of Music.”


A contemporaneous instrumental album, “No Strings (With Strings)” by the show’s original orchestrator, Ralph Burns, demonstrates how very tuneful the melodies are, taken on their own. 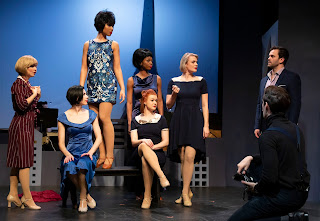 Taylor’s script is soft-grained and talky, but always intelligent. It’s a genuinely adult love story, if not a particularly gripping one. It may be heresy to say that even in these small venues, modern shows ought to be miked to give the overall sound some of the requisite Broadway oomph. It’s not a matter of audibility but rather recreating the proper ambience. This would serve not only to  enhance the songs, but would also serve to make the dialogue more involving.


Beyond the excellence of Bond and Knight, the show has been very well cast. Ewing gives a particularly stylish account of “The Man Who Has Everything.” York has just the right manner as the worldly-wise Vogue editor. Wechsler brings a lively presence to her good-hearted party girl, and Connaghan is appropriately hateful as her caddish boyfriend.


Matthew Solomon’s very nice costume design captures the era well, though some of the wigs are risible.