West Side Story (The Broadway Theatre) 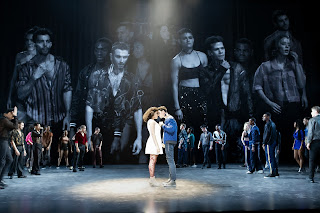 
This is not your grandmother’s “West Side Story” by any means, but then, would you expect anything less from avant-garde Belgian director Ivo van Hove? The virtual police lineup of the Jets gang that opens the show signals right from the start that this will be a different approach. The usual design hallmarks of a Hove production are here, most especially Luke Hall’s truly massive video projections which often dwarf the players. But, as most of the projections are close-ups of the live action, the conceit is less objectionable.


The settings -- Doc’s drugstore, Maria’s bedroom, the dress shop, etc. -- are recessed and either partly or entirely out of audience view, courtesy of van Hove regular Jan Versweyveld’s set design.


Lovers Tony (Isaac Powell) and Maria (Shereen Pimentel) are here tattooed kids in a modern vein. The Jets are not the Irish, Polish, Italian kids of the 1950s, but a distinctly diverse gang, headed by an African-American Riff (Dharon E. Jones). With the extensive diverse casting, it must be said that it is sometimes difficult to tell one side from the other.


There’s no intermission after the Rumble, as usual, and the show plays straight through for a total length of about one hour and 45 minutes.


But for all of that fiddling with tradition or more likely because of it, I found the production more often thrilling than not. Leonard Bernstein’s music still sounds absolutely splendid under the baton of Musical Director Alexander Gemignani. Bernstein, Sid Ramin, and Irwin Kostal shared credit for the original orchestrations, and now the reliable Jonathan Tunick has reorchestrated.


The last Broadway revival was 2009, under the direction of the late book writer Arthur Laurents. An attempt was made to give it a bit of a facelift with new Spanish lyrics (by Lin-Manuel Miranda) for the Puerto Rian characters, but was otherwise in a traditional vein. And yet for all its virtues, it wasn’t half as compelling as this one.


I can’t praise Powell and Pimentel enough. All their vocal moments are highlights. Powell’s “Something’s Coming” and “Maria” are superb, as is Pimentel’s “I Have a Love,” and the rapturous “Tonight” duet. Dramatically, they make Tony and Maria’s love extremely real and their plight heartbreaking. Ramasar is more assured as Maria’s brother, Bernardo, than he was as Jigger in the recent “Carousel” revival and, of course, his dancing is predictably exciting. And Yesenia Ayala is a highly satisfying Anita in all respects. The “America” number really lands, and she nails “A Boy Like That.” Her climactic taunting in Doc’s store is here staged as an outright rape. 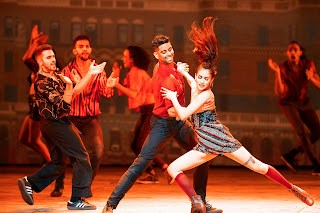 “I Feel Pretty,” its lyric so often disparaged by lyricist Stephen Sondheim himself as inappropriate for the character of Maria, has been dropped, and so has the “Somewhere” ballet. I missed the former but less so the latter. In any case, “Somewhere” is beautifully sung by Powell and Pimentel, as Richard Beymer and Natalie Wood (or their voice dubbers) did in the film, rather than an offstage soprano, with symbolic balletic couplings (including some same sex ones) behind them. That poetic sequence is, in fact, a high point in the production.


In this much grittier context, the comic “Gee, Officer Krupke” now seems a bit out of place, though it’s sung with edge, while sobering projections of police/gang member interaction fill the wall behind, adding a rather unnecessary irony to the already targeted lyrics.


Though Robbins’ choreography was classic, the new moves here are quite compelling on their own terms. The Dance at the Gym, The Rumble (in the rain), and the other setpieces have a wonderfully fresh feel, and there’s a marvelous bit when Tony and Maria are parting after their famous “Tonight” duet -- not performed on a balcony/fire escape -- but on level ground, are being pulled apart (symbolically) by their respective family and friends.


An D’Huys’ costumes are strictly contemporary, dispelling any sense that the action is taking place in the Fifties. Tom Gibbons’ state-of-the-art sound design is beautifully balanced, highly essential given all the off-stage action.


In the speaking roles, there are standout turns by Daniel Orekes as Doc, Pippa Pearthree as Glad Hand, who vainly entreats the kids to make nice at the gym dance, and Thomas Jay Ryan and Danny Wolohan as the racist cops, Lt. Schrank and Krupke.


Though the revisions may sound radical, all in all, this “West Side Story” emerges as far more respectful of the true spirit of the show than other revisals such as last season’s misguided and distasteful “Oklahoma!” to name one.


Below: Amar Ramasar, Yesenia Ayala and cast
Print this post
Posted by Harry Forbes at 1:00 PM