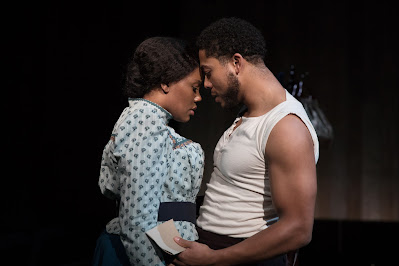 Composer Ricky Ian Gordon has found the music inherent in Lynn Nottage’s acclaimed 2003 play of the same name, and with Nottage herself fashioning the libretto (necessarily streamlining the play to make way for the music), has come up with a compelling modern chamber opera.

The work is the result of a collaboration between Lincoln Center Theater and the Metropolitan Opera as part of their New Works Program, and, as such, voices are of a high level indeed,

Esther (Kearstin Piper Brown), a lonely, hard working African-American seamstress in 1905 New York, who hopes one day to open a beauty parlor for a black clientele, is wooed by correspondence by George (Justin Austin), a Caribbean worker on the Panama Canal. As Esther can neither read nor write, her responses are penned by two of her very disparate customers, a wealthy white woman Mrs. Van Buren (Naomi Louisa O’Connell) and a black prostitute Mayme (Krysty Swann) who plies her trade in the Tenderloin district. The romantic setup is doomed to sour when George arrives in the city, and it becomes clear after the wedding that George is not what Esther and her romantically-minded clients had imagined based on his letters. But then, neither is she.

All the characters have unfulfilled dreams and are aspirational in one way or another, looking for better lives.

Brown is tremendous in the lead role, on stage almost every moment, and deeply affecting both vocally and dramatically. (The part is played by Chabrelle Williams on Wednesday and Saturday matinees.) In fact, the cast acts as well as they sing, making a most distinguished ensemble.

Under the assured guidance of director Bartlett Sher, everyone does exceptional work, including Adrienne Danrich as the unsentimentally maternal Mrs. Dickson who runs Esther’s boarding house, and Arnold Livingston Geis as Mr. Marks, the Hasidic fabric merchant in the Jewish ghetto, who is Esther’s true soulmate, both sharing a deep appreciation for fine material, though if they even recognize their fondness for each other as love, it would be a societal impossibility given the religious divide. Their scenes together are lovely.

There are no standalone songs as such, but Gordon’s music is always apt, and period appropriate from the cakewalk infused opening strains onwards. Mayme has a raunchy number about opium which is the closest “Intimate Apparel” comes to musical comedy. (Dianne McIntyre has provided the lively choreography here and elsewhere.) 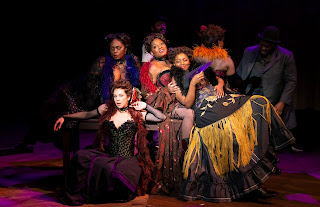 Music Director Steven Osgood conducts the excellent two piano accompaniment while supertitles are projected on the back of Michael Yeargan’s simple but evocative period sets, with Jennifer Tipton’s expert lighting. Though pianos add to the intimacy, a fuller orchestration would not have been unwelcome.

Catherine Zuber’s costumes, including the titular “intimate apparel”  perfectly capture the period. There’s ironic humor to be had in the similarity between the garments Esther fashions for Mrs. Van Buren and Mayme.

Nottage’s words are remarkably clear for the most part, thanks to the cast’s careful enunciation and Marc Salzberg’s exemplary sound design.

(Below) Photo by T. Charles Erickson: Krysty Swann (center) and the company

Print this post
Posted by Harry Forbes at 10:54 AM