The Merchant of Venice (Theatre for a New Audience) 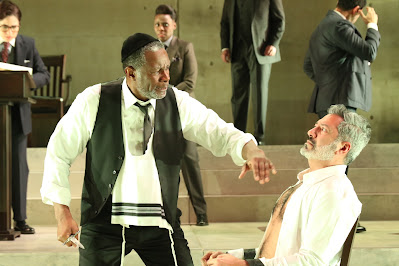 Director Arin Arbus’ production of “The Merchant of Venice” is outstanding in its clarity and fascinating in its take on this problematic play. Above all, it showcases a truly superb performance by the great John Douglas Thompson as Shylock, one of the greatest portrayals of the role I’ve ever seen.

The cast is uniformly excellent, and Arbus has vividly underscored the societal bigotry against Shylock on every level. The result is that the moneylender’s desire for revenge has rarely seemed so justified. A jaundiced view of the Christian characters is, of course, more often than not the usual practice nowadays, but Arbus goes the limit.

Shakespeare scholars like Harold Bloom argue out that, by all rights, Shylock was conceived and ideally should be performed as a comic villain, and that playing the role for noble pathos throws the play off balance, even as it undercuts antisemitism. Nonetheless, Shakespeare has given an actor enough fodder to support the latter interpretation, and Thompson does indeed win our sympathy even when at his most vindictive. None of the Venetian characters emerge as anything approaching heroic.

Arbus also plays up the homoerotic relationship between Antonio (Alfredo Narciso), the titular merchant, and his friend Bassanio (Sanjit De Silva), Portia’s beloved. One might even question whether Bassanio loves Portia at all, or has merely wooed her for her money. The same can be said of Lorenzo (David Lee Huynh) who elopes with Shylock’s daughter Jessica (Danakya Esperanza) along with her father’s precious ducats.

The casket scene wherein Portia is approached by three suitors (Bassanio being the last) who, in order to win her hand, must choose which of the three boxes contains Portia’s portrait, are most amusingly handled. First Maurice Jones as The Prince of Morocco, then Varín Ayala as The Prince of Aragon, bedecked in gold medals, who seems more interested in Portia’s steward Balthazar (Jeff Biehl) than in Portia.

This is a diverse production in the best possible way. The casting doesn’t call attention to itself, as all are so perfectly suited to their roles, and create a seamless ensemble. It is said that Thompson is the first Black actor to play Shylock at a professional theatre in New York City, the last being the legendary Ira Aldridge in the early 1800s.

Of course, the casting of Thompson subtly makes present-day parallels all the more vivid, and increases the play’s universality. But Shylock’s Jewishness is not diminished in the least. And the play even ends with Shylock and Jessica reciting a mournful Kol Nidre.

Isabel Arraiza is a compelling Portia, both as a feisty young woman, and in her boyish courtroom disguise. Amusingly, her first appearance is in present day gym workout mode, no shrinking violet she. “My little body is aweary of this great world…”  takes on a droll new meaning.

But really, there aren’t enough superlatives to heap upon Thompson’s performance, as he runs an impressive gamut of emotions from authoritatively confident to determinedly vengeful to utterly defeated. And, experienced Shakespearian that he is, he delivers all of Shylock’s familiar speeches superbly.

Arbus directs the pivotal courtroom scene for maximum suspense. The moments leading up to the expected cutting of Antonio’s flesh have rarely seemed so suspenseful. But at all times, Arbus’ choices seem apt. Amid the high drama, there’s comedy and also deep sentiment.

Print this post
Posted by Harry Forbes at 6:56 AM