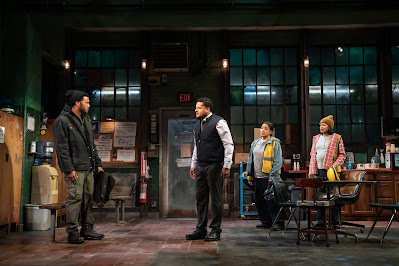 Dominique Morisseau’s affecting play, which premiered at the Atlantic Theater Company in 2016, concerns Detroit workers facing the imminent closure of their auto factory circa 2008. We observe the four-hander’s characters in the break room as they grapple with as yet unsubstantiated rumors about the closing. Foreman Reggie (Brandon J. Dirden) knows what’s coming, but tries to keep it from the others until he can formulate the best approach to dealing with management.

He confides in longtime worker Faye (Phylicia Rashad), union rep (and longtime family friend) who, unbeknownst to the others, has fallen on hard times, but he swears her to silence. Meanwhile, malcontent Dez (Joshua Boone), suspicious of white-collar Reggie and management alike, banters with the pregnant perennial optimist Shanita (Chanté Adams) who wards off Dev’s flirtations.

Michael Carnahan's realistic breakroom set is surrounded by a proscenium with factory imagery projections. Breakdancer/choreographer Adesola Osakalumi provides the opening scene-setting and reappears throughout between scenes, representing both the workers and the mechanical nature of their jobs. Though he and Nicholas Hussong’s accompanying projections are skillfully done, the play would be just as effective without the glitzy framing. Emilio Sosa’s costumes are satisfyingly authentic.

The first act, which takes its time laying out the stakes while teasing certain plot turns to come, ends on a dramatic note, as Dev refuses to allow a routine, random search of his bag. (We learn early on that he’s packing a gun.) But the second act grips from start to finish, culminating in a genuinely moving wrap-up.

MTC Artistic Advisor Ruben Santiago-Hudson, who so superbly performed his own “Lackawanna Blues” recently in the same space, directs his excellent cast with a sure hand.

Rashad, in an impressive change of pace, convincingly embodies her tough chain-smoking lesbian character. Dirden beautifully conveys the compassion behind the by-the-rules supervisor. Adams, currently on screen in the Denzel Washington directed film, “A Journal for Jordan,” shines here also in a radically different sort of role. Boone is likably empathetic as the prickly young man.

I have to admit there were some not inconsiderable audibility issues for a good part of the evening, not only because of the Detroit dialect but performances seemed to be pitched at too naturalistic a level. One’s ears eventually adjust and the cast seems to project more clearly by the second act, but much of Morisseau’s crackling dialogue was lost.

There are thematic similarities to this season’s “Clyde’s” in terms of a close-knit group of workers grappling with a situation out of their control, though there was considerably more humor beneath the pathos in the latter. Like “Clyde’s” playwright Nottage, Morisseau has the knack of writing dialogue that rings absolutely true.

There’s an amusing program insert from Morisseau giving the audience “permission” to give vent to audible reactions and responses, but cautioning not to the extent that they unduly distract the actors. At the reviewed performance, there was at least one empathetic response when a character seemed unfairly treated, and some approving murmurs during some sentimental moments elsewhere, but nothing disruptive.

As another program note by Morisseau persuasively indicates, the play now has the added resonance of shedding light Covid-era plight of essential workers. And indeed it powerfully does.

Print this post
Posted by Harry Forbes at 2:27 PM