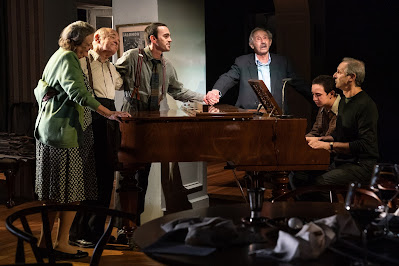 So is it safe for Jewish people to live in France? And is there, in fact, anyplace in the world truly free of antisemitic sentiment? Is Israel the answer, even with all the attendant dangers of the Middle East? Such are the themes percolating throughout Joshua Harmon’s intriguing three-act, three-hour-plus, new play.

Distant American cousin Molly (Mollly Ranson), in France to study the language, becomes their weekend house guest, and falls for Daniel. Marcelle’s non-religious brother Patrick (Richard Topol) serves as a narrator throughout the play explaining how their father had inherited a generations-old piano store which the family still owns, and offering a history of anti-Semitism along the way.

When Daniel first enters, he is bruised and bloody from having been attacked by ruffians. Marcelle is frantic with concern and wants to call the police, but Daniel adamantly refuses, just as he refuses to wear a concealing baseball cap over his kippah.

A little later, Charles comes home with a surprising revelation: he doesn’t feel safe in Paris any longer, and wants the family to move to Israel, a notion that Marcelle dismisses out of hand as not only impractical but impossible, given their work and familial commitments particularly regarding her aging father (Pierre Espstein).

The action takes place in 2016 and 2017, on the cusp of right wing Marine LePen’s possible election, and concurrently, Donald Trump’s in the states, but there are flashbacks to the 1940s where we meet Marcelle and Patrick’s great grandparents, the Salomons, Irma and Adolphe, movingly played by Nancy Robinette and Kenneth Tigar. They are living in their apartment in isolation during the Occupation wondering and worrying about the state of their children who were taken from them. Eventually, son Lucien (Ari Brand) and grandson Pierre (Peyton Lusk) return shocked from the horror they have witnessed during their incarceration. We learn it is Pierre who is Marcelle and Patrick’s father.

David Cromer directs the epic story with a sure hand, and performances are all superb. We can believe they are an actual family. Everyone speaks unaccented English, but we know they are meant to be speaking in French.

For such a heavy duty topic, Harmon keeps things relatively light most of the time, and even with two intermissions, the time flies by, and the play is never less than absorbing. The family relationships are at first a little confusing, even with Marcelle spelling it all out for Molly not once, but twice. Still, eventually, we connect the dots.

Takeshi Kata’s turntable set, lit by Amith Chandrashaker, encompasses the Benhamou upscale apartment, and the Salomon’s wartime refuge.  Sarah Laux has designed apt costumes for both eras, while Lee Kinney and Daniel Kluger’s sound design is a model of clarity..

It’s a thought provoking play, and its themes must surely resonate with Blacks and Asians, and indeed with any group living with discrimination. Though Harmon’s dialogue is bright and funny, particularly Elodie’s rapid-fire and didactic rants, the themes are certainly trivialized, with many deeply moving moments along the way.

Print this post
Posted by Harry Forbes at 2:40 PM