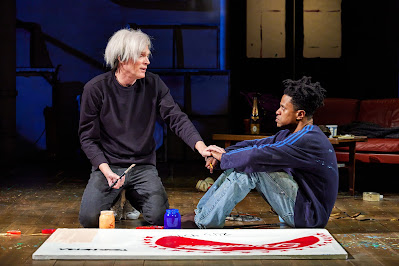 Playwright Anthony McCarten, who’s written solid screenplays based on real-life personages (e.g. “The Two Popes” (Benedict XVI and Francis), “Bohemian Rhapsody” (Freddie Mercury), “The Theory of Everything” (Stephen Hawking), and theater pieces like the current Neil Diamond bio, “A Beautiful Noise,”  turns his pen to the art world and the unlikely seeming pairing of Andy Warhol and Jean-Michel Basquiat who, in 1985, joined forces for a well-publicized art show suggested by the Swiss art dealer Bruno Bischofberger who represented both of them.

The play, directed by Kwame Kwei-Armah, artistic director of the Old Vic,  comes to MTC after a successful run at the London venue.

The conflict between the two artists is not, frankly, hugely compelling, despite McCarten and Kwei-Armah's efforts. On the one hand, there’s Basquiat trying to persuade Warhol, who had not been brush painting for years (using the silk screen process instead), to pick up his brushes again, And, on the other, there's Warhol who's infinitely more interested in filming the reluctant Basquiat at work. There’s more drama in the second act than the first, when Basquiat’s former girlfriend (the excellent Krysta Rodriguez in a small but lively role) bursts in needing money for rent and an abortion, and a friend of Basquiat’s, Michael Stewart, a fellow graffiti artist, lies near death in the hospital after being pummeled by police. Basquiat is deeply haunted by the thought that it could just as easily have been him.

There’s some understandable dramatic license in his script. For one thing, each of the men knew and admired the other, whereas the script has it that Bischofberger (a very amusing Erik Jensen) needed to use all his skills of manipulation to get the two to work together. Basquiat craved fame and recognition as much as Warhol, though there’s a sense in the script that he disdains Warhol’s commercialism. Still, the fundamental dynamics between Warhol and Basquiat ring true: respect mixed with envy on Warhol’s part, and a vastly different world view.

Of rather greater import than the narrative of the play itself are the dynamic performances of Bettany and Pope. Bettany grows more interesting with each new project; he’s developed into such a fine character actor, and gives a highly convincing impersonation of Warhol. Pope is currently generating well-deserved buzz for his film, “The Inspection,” and here returns to the scene of his Tony-nominated MTC triumph in “Choir Boy,” with a highly charged turn. These versatile actors are reason enough to see the play.

Lastly, a sidebar carp: this is the latest in an unfortunate trend of the audience entering the theater to an assault of loud music -- or, in the case of “Ohio State Murders” -- other amplified sounds. Whether the purpose is scene-setting -- in this case, a Studio 54 vibe -- or creating an immersive experience, it’s a needlessly abrasive and alienating gimmick. “Topdog/Underdog,” “Ain’t No Mo’,” and even the Public’s revival of “A Raisin in the Sun,” for heaven’s sake, have all recently employed this irritating device.