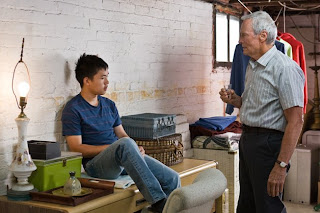 As with his 2006 double-release of "Flags of Our Fathers" and "Letters from Iwo Jima," the prolific Clint Eastwood is following up his just-released "Changeling" with "Gran Torino" (Warner Bros.). A more modest film, it proves an improbable and gritty, if ultimately humane, redemption tale.

Eastwood himself is in peak form playing crusty Korean War vet and retired autoworker Walt Kowalski. He's just been widowed and the film, set in Detroit, opens with a large Catholic funeral presided over by redheaded Father Janovich (Christopher Carley).

Walt's a tough old geezer with exacting standards, and casts a withering eye when his niece shows a bare midriff at the service. His grown sons, raised under Walt's autocratic thumb, keep their wary distance.

He's contemptuous of Father Janovich, rebuffing the cleric's condolences at the reception which follows. But the priest tells him that Walt's late wife expected Father Janovich to keep an eye on her reprobate husband and persuade him to go to confession; the priest declares he doesn't intend to give up. And he doesn't.

Throughout the film, Father Janovich shows up several times, even hounding Walt in the local bar. With each encounter, Walt becomes more receptive, and we see he's not such a bad guy as the early scenes suggest.

But Nick Schenk's script (story by Dave Johannson) establishes that Walt mightily resents the encroachment of the Laotians (specifically, Hmongs) who have moved into his rundown Detroit neighborhood, prompting a litany of racial epithets at every opportunity.

But Walt soon becomes the Hmongs' reluctant hero after he saves the nice young teen next door, Thao (Bee Vang), from being pressured to join a marauding Hmong gang. (The boy's first assignment was to steal Walt's prized Ford Gran Torino.)

Some time later, gun-toting Walt rescues Thao's smart and sassy older sister, Sue (Ahney Her), from serious harassment by three African-American thugs and drives her back home. His racial slurs in the car don't bother her in the least; she sees the good man underneath and, much to his irritation, dubs him Wally.

On his birthday, estranged from his own family, he accepts Sue's invitation to come over to their place for a feast. For reasons not entirely clear, the whole multigenerational clan warms to the stony-faced stranger who, after sampling some native dishes, undergoes an almost immediate transformation.

When Thao's mother offers to have the boy work off the attempted car theft through service to Walt, the latter reluctantly agrees. In short order, they bond.

On the plus side, this entails Walt landing a construction job for his young friend; on the other, he tries to teach the timid youth how to be "a man," which involves talking as tough as his mentor does. This is all played for humor, showing that Walt's misanthropy is only skin-deep. But, much as "All in the Family's" Archie Bunker was criticized for being a too-lovable bigot, the same might be said here.

Eastwood directs with his customary polish, and his sort of geriatric "Dirty Harry" character stops just short of the vigilante bloodbath you might expect. Print this post
Posted by Harry Forbes at 1:49 PM