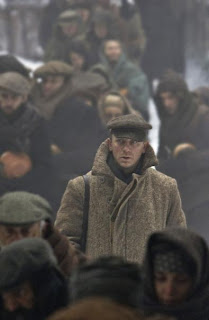 We're accustomed to so many Holocaust stories where Jewish people react passively to being rounded up, herded onto trains and interned in concentration camps that it's more than a little surprising to learn that some fought back.

"Defiance" (Paramount Vantage) is the well-acted, too lengthy, but ultimately worthy history lesson about the Bielski brothers -- Tuvia (Daniel Craig), Zus (Liev Schreiber) and Asael (Jamie Bell) -- Jewish farmers from what is now Belarus who chose not to be passively victimized by the Nazis.

After their parents are killed, they take refuge in the Naliboki Forest. Before long, they're joined by several needy others. As time goes by, the brothers shelter hundreds of Jews, while violently dispatching German attackers.

Tuvia, the eldest, becomes the leader of the community, and one who brooks no opposition to his authoritarian rule. Considering the lives at stake -- and threats of hunger, disease, attack and internal rebellion -- this was perhaps a necessary dictatorship. "We will live free, like human beings, for as long as we can," he vows.

The hot-headed Zus who, at one point, spearheads a violent ambush of a Nazi convoy, later suggests joining forces with a Russian partisan group. The Russians reluctantly agree to the alliance, but despite the apparent effectiveness of the teaming, later reveal unchanged prejudice toward them.

Director and co-writer Edward Zwick keeps the episodic, story-spanning film moving as well as can be expected given the three-year time span it covers, and the script (written with Clayton Frohman from the book by Nechama Tec) obviously gives a different perspective than your typical Holocaust movie.

Given the complexity of the situation, the Bielskis' heroism here is shown to be marred by several instances of senseless slaughter. Though the Bielski detachment was the largest Jewish partisan band with the greatest number of lives saved, it was also responsible for a record number of German casualties.

When, for instance, the brothers confirm the identity of the police captain responsible for their parents' deaths, Tuvia tracks down the man at dinner with his family, and coldly shoots all at the table, except, presumably, the man's wife. And even beyond the lapses of moral rectitude shown by Tuvia and Zus, we see the crowd's hunger for revenge, when they capture a hapless German soldier who begs for mercy only to be savagely beaten to death by the mob, while Tuvia looks on enigmatically.

As the forest community grows to the point of constituting a virtual village, and relationships form, the concept of "forest wives" and "forest husbands" takes shape, even as pregnancies are forbidden. After learning that his wife and child have perished, Tuvia forms a bond with Lilka (Alexa Davalos). (In real life, Tuvia and Lilka would remain together for the rest of their lives.) Zus, in turn, forms an alliance with Bella (Iben Hjelje), while baby brother Asael falls for and actually marries Chaya (Mia Wasikowksa). Print this post
Posted by Harry Forbes at 1:36 PM