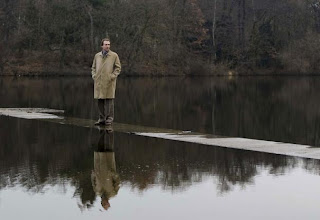 The Reader" (Weinstein) is a necessarily bleak, yet well-played and generally affecting, adaptation of Bernhard Schlink's 1995 international best-seller. It was the first German novel ever to reach the top spot on The New York Times' best-seller list, and is said to be partly autobiographical.

Set in postwar Germany beginning in the 1950s, the narrative charts the morally complex relationship between lawyer Michael Berg (Ralph Fiennes) and older woman Hanna (Kate Winslet), with whom he had an affair when he was a teenager (18-year-old David Kross).

They met when the brusque, mostly humorless, woman (who works as a bus conductor) found the teenager retching in her courtyard, and helped him home.

Michael had scarlet fever, and after his long recuperation, he sought out Hanna's apartment to thank her. A palpable attraction eventually morphed into a full-out affair, unbeknownst to the boy's parents. But as time went by, what grounded their relationship most was Michael reading aloud to her the great works of literature from his school books: "The Adventures of Huckleberry Finn," "War and Peace," "The Odyssey," and so on.

Throughout it all, Hanna remained mysteriously bossy and remote, except for the time she accepted Michael's suggestion of a biking weekend when she seemed finally to enjoy herself. We don't yet know the reason for Hanna's austerity.

The relationship eventually sours and they part. Years later, Michael is studying law. When Professor Rohl (Bruno Ganz) has his students observe some court sessions on Nazi war crimes -- based apparently on the Frankfurt, Germany, Auschwitz trials held between 1963-65 -- Michael (partial spoiler) is surprised to find Hanna is among the defendants.

It would be unfair to reveal the details of Hanna's involvement or more of the plot, but suffice to say, Michael ages (and morphs into Fiennes), and the relationship between the two evolves into an utterly different but profoundly compassionate one.

In playwright David Hare's adaptation, the story shuttles back and forth through time, whereas the book's narrative was chronological. Stephen Daldry, who last worked with Hare on the movie version of "The Hours," directs with much the same sensitivity and nuance.

Winslet is superb and convincing as a downtrodden German worker, concealing (as it happens) not one but two secrets, aging believably to a haggard 60-something. Newcomer Kross is also outstanding, and though not a perfect match, somehow makes a plausible one for Fiennes.

Some suggest that the inter-generational relationship between Hanna and Michael is meant to serve as a metaphor for Germany's collective guilt and its impact on later generations who "inherited" the crime, while gingerly suggesting the possibility of emotional reconciliation, if not exactly forgiveness.

Clearly, the early parts of the story will be unpalatable for some. The book itself was controversial both in Germany, where it raised charges about Schlink courting sympathy for Nazi perpetrators, and elsewhere for its depiction of that initial relationship between Hanna and Michael.

A poignant footnote: Celebrated directors Anthony Minghella and Sydney Pollack, co-producers of the film, both passed away during production. Print this post
Posted by Harry Forbes at 2:16 PM