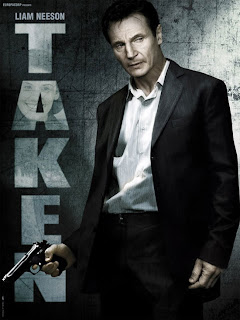 A father's devotion to his daughter has rarely resulted in as high a cinematic body count as it does in "Taken" (Fox), a formulaic, contrived but effectively tense thriller about a kidnapping.

Liam Neeson is Bryan Mills, a divorced ex-government operative who has moved to Los Angeles to be near his 17-year-old, pampered teenage daughter, Kim (Maggie Grace) -- now living with her mother, Lenore (Famke Janssen), and well-to-do stepfather.

When asked for his approval for Kim to travel to Paris with girlfriend Amanda (Katie Cassidy), Bryan hesitates. But Lenore and Kim eventually guilt-trip the largely absent father into relenting, with the only proviso that Kim phone him every day. At the airport, he learns that Paris is only the starting point for a European road trip, yet Lenore prevails upon him once again to put aside his seemingly foolish qualms.

Once they land, Kim and trampy Amanda fall for a charming young Frenchman's ruse to share a cab in order to learn the girls' address. And moments after they go upstairs, bad guys burst in and grab the screaming Amanda. Terrified Kim relates what is transpiring to Bryan over the phone, before she is summarily yanked from her hiding place.

Bryan hightails it to Paris -- leaving the now-hysterical mother and her milquetoast husband in the dust -- to track down the culprits, who, he has learned, are notorious Albanian sex traffickers.

Ignoring the warnings of former security colleague Jean-Claude (Olivier Rabourdin), Bryan goes into full gear with the skills and inexhaustible stamina of a superhero. He has been told he must find her within 96 hours, or she'll be lost forever.

Sex trafficking is, of course, a very real worldwide epidemic, and it's a human rights issue of importance, though we suspect the makers of "Taken" are far more interested in shoot'em-up action than social commentary.

Neither the sex nor the violence here comes close to the exploitative elements in, say, the reprehensible "Hostel" series.

Though the violence is fairly intense, the worst of it is mostly implied without blood. Showing that he has no boundaries when it comes to rescuing his beloved daughter, Bryan is not above administering electric shocks to one of the grungy traffickers, or even shooting ("a flesh wound" only) Jean-Claude's very pleasant middle-class wife for dramatic effect after her husband tries pulling a gun.

Neeson, serious actor that he is, plays with a genuine intensity that almost, but not quite, makes you overlook the improbable setup and ludicrous plot developments. He also wears the mantle of action hero surprisingly well.

If you're looking to dissuade your teenage daughter from an unescorted trip abroad, this film will surely do the trick. Print this post
Posted by Harry Forbes at 2:21 PM