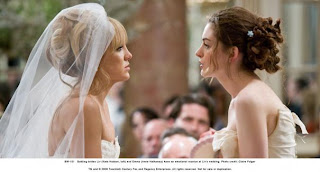 The title calls it right, for "Bride Wars" (Fox 2000/Regency) is an amiable -- if all too predictable -- romantic bauble about longtime devoted pals who have dreamt since childhood of June weddings at New York's Plaza Hotel, but then, as adults, have a falling-out just before their much-anticipated nuptials there.

Liv and Emma hatched their romantic plan as kids from New Jersey, after they attended a wedding at the famed landmark. Now, with live-in boyfriends Daniel (Steve Howey) and Fletcher (Chris Pratt) having proposed, the path is ready for their dream to come true. Daniel is a calming influence on the Type-A Liv, and loves her for all her faults, but Fletcher is far less understanding about Emma's escalating marital jitters.

Liv's brother, Nate (Bryan Greenberg), is clearly sweet on his sister's friend, whom he's known all his life, but Emma seems only dimly aware of his interest.

When the assistant to high-powered wedding planner Marion (Candice Bergen in an amusing bit) screws up the dates, the ladies are -- horrors! -- forced to have their weddings in the same room.

Before long, Liv and Emma are hell-bent on sabotaging each other's weddings. Their tactics include Liv fiddling with Emma's tanning spray at Emma's spa, turning the latter's skin burnt orange; Emma switching Liv's hair coloring to garish blue at the hairdresser; Liv substituting the dance-instructor-from-hell for Emma's real one; and Emma tempting Liv with fattening food so she won't fit into her wedding dress. And so on.

But, of course, throughout all the catty and sophomoric shenanigans, it's easy to see they actually profoundly miss their friendship, which comes to the fore in the film's farcical conclusion on the big day.

Hudson (who also produced) and Hathaway are in good comic form, and there's some poignancy beneath the slapstick, as orphaned Liv's longing for her parents figures in the plot, too.

With, as noted, the significant moral reservation that Emma and Liv cohabit with their fiances, director Gary Winick's only fitfully amusing "chick flick" otherwise has no significant sex or language issues. (There's a scene where Emma crashes Liv's bachelorette party and takes to the stage with a couple of male strippers, but it's fairly tame).

The screenplay by co-writers Greg DePaul (who wrote the original story), Casey Wilson (who briefly appears in the film) and June Diane Raphael features worthy if pat messages about lasting friendship and sensible priorities, including ultimately disdaining all the materialistic trappings of deluxe weddings. But we've seen all this before. Print this post
Posted by Harry Forbes at 1:22 PM