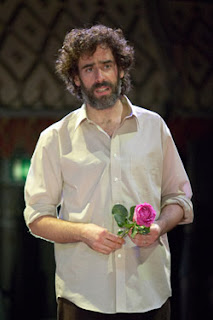 Several classics there, including relative rarities by August Strindberg and Anton Chekhov, possess the cathartic and redemptive power of the best plays. The former's "Creditors" was given a powerful mounting -- tautly directed by actor Alan Rickman -- at the intimate Donmar Warehouse.

In the story the ex-husband (Owen Teale) of a capricious artist (Anna Chancellor) poisons the mind of her new young husband (Tom Burke). The plot strained credulity but in the hands of these three pros one barely noticed.

So too, "Ivanov," generally reckoned one of Chekhov's lesser plays, emerged top-drawer in the Donmar Warehouse's staging, the first of four classics given at the larger Wyndham's Theatre, since the company's own venue sells out so quickly. (Classic plays with Jude Law, Derek Jacobi and Judi Dench follow later this season.)

Kenneth Branagh -- lately preoccupied largely with movie directing -- has made a triumphant stage comeback as the inexplicably spiritless government official who's fallen out of love with his dying Jewish wife and wary of the attentions of a close friend's daughter.

Like "The Seagull" and other Chekhov masterworks, the play mixes the comic and tragic in a way that defies contemporary classification. Michael Grandage's production of Tom Stoppard's deft new version beautifully navigates the shifts in tone. The cast, including Gina McKee, Andrea Riseborough and Kevin R. McNally, matches Branagh's accomplished anti-hero.

Harold Pinter's modern classic, "No Man's Land," gets an assured revival at the Duke of York's under Rupert Goold's direction with lead performances that bear flattering comparison with the play's legendary creators, John Gielgud and Ralph Richardson.

The enigmatic situation involves a wealthy man (Michael Gambon) and the erudite derelict (David Bradley) he brings home. Supported well by David Walliams and Nick Dunning as the thuggish men in Gambon's employ, the human dynamics are brilliantly drawn, even as Pinter -- in customary form -- teases you along.

Similarly enigmatic and also directed by Goold (who co-adapted the play with Ben Power) was Luigi Pirandello's groundbreaker of modern theater, "Six Characters in Search of an Author," at the Gielgud. In the original, a theater company is invaded by a half-dozen fictional characters comprising a singularly dysfunctional family who take over the proceedings. Here, it was a documentary producer and her crew grappling with the issue of how much license they can take with reality.

Purists may carp, but Pirandello's themes -- What is real? What is fiction? Do vivid characters like Hamlet take on a life of their own? -- were rendered vividly with Ian McDiarmid a standout as the abusive father of the fictional family.

With such a heavy load of dysfunction, it was refreshing to encounter the Old Vic's delicious revival of Alan Ayckbourn's "The Norman Conquests," once a memorable PBS production with Tom Conti.

Comprised of three separate full-length plays -- each taking place in separate sections of a suburban house (living room, dining room and garden) -- the basic plot concerns the aftermath of a failed attempt by the titular would-be Lothario (Stephen Mangan) to take his sister-in-law for an illicit weekend -- has laughs in abundance, given the farcical nature of its obviously immoral premise.

In the hands of director Matthew Warchus and his brilliant cast (Amelia Bullmore, Jessica Hynes, Ben Miles, Paul Ritter and Amanda Root), the painful loneliness of these characters comes through with near-Chekhovian poignancy. There are times when you truly don't know whether to laugh or cry.

Each play is self-contained, but seeing all three with their differing perspectives and plot revelations makes a uniquely rewarding experience. If you're coming to London, this is absolutely essential adult viewing.

On the musical side, a revival of Jerry Herman's "La Cage aux Folles" is now playing in the West End. The story of a young man's efforts to keep his background as the son of the proprietor of a transvestite nightclub from his fiancee's highly moralistic parents is more than a little tired, after the original French film, its two sequels and Mike Nichols' Hollywood remake, "The Birdcage."

But some adults may find that director Terry Johnson's innovative pared-down staging and the central performances of West End musical veteran Denis Lawson as the club owner and especially actor Douglas Hodge as the club's flamboyant star transcend the slapstick and sentimentality.

On an even lighter side, and this time suitable for families, is a musical version of "Zorro," using the music of the Gipsy Kings, directed by Christopher Renshaw. The swashbuckling story is silly, but the music is atmospheric, and given the exoticism of its flamenco rhythms (and choreography), gets points for novelty. Flu had felled two of the principals at a recent performance, but the engaging leads Matt Rawle and Emma Williams were in fine form.

Though it hadn't yet opened, American playwright Ken Ludwig's adaptation of Robert Lewis Stevenson's "Treasure Island" has since received favorable notices, and also would seem a safe bet for kids. Print this post
Posted by Harry Forbes at 2:41 PM