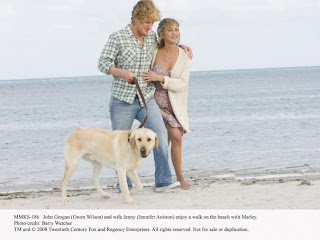 Though "Marley & Me" (Fox/Regency) is ostensibly about a dog -- a big, rambunctious and unruly one at that -- this heartwarming adaptation of John Grogan's best-seller is, essentially, the story of a marriage and family, and one of the most positive ones produced by Hollywood in recent years.

Deceptively plotless, its rambling pace seems designed to mirror life itself in charting the true story of John (Owen Wilson) and his wife, Jenny (Jennifer Aniston), who leave snowy Michigan at the start of the film for sunny West Palm Beach, Fla., where they each land jobs with the South Florida Sun-Sentinel.

John's reporter friend, Sebastian (Eric Dane), recommends him to the paper's gruff but good-hearted editor, Arnie Klein (Alan Arkin). John gets the job, but soon envies his friend's plum assignments, because he himself is saddled with routine stories.

When John confides to Sebastian his apprehensions about starting a family, the latter suggests a puppy to ease the transition to parenthood.

The cute little Labrador the couple adopts quickly grows into a 100-pound monster, lovable yes, but destructive and uncontrollable in the extreme. There are plenty of scenes of Marley running amok, most of them more wince-inducing than funny.

Yet throughout all this -- including a disastrous interlude at a dog obedience school run by the martinet Ms. Kornblut (Kathleen Turner) -- John and Jenny accept Marley for all his faults, their tolerance emblematic of the movie's compassionate worldview.

At work, John reluctantly accepts Arnie's suggestion that he write a human interest column -- a sorry detour, John thinks, from his serious aspirations -- but it develops that the columns he writes about Marley become hugely popular.

Eventually, John and Jenny decide to "try" for a baby, and she does indeed become pregnant, but loses the child. This poignant moment finally gives the film the momentum that sustains it to the end.

Another child, the first of three, will come, and Marley will remain -- against all odds -- an integral part of their household through the joys and vicissitudes of family life.

Director David Frankel's adaptation really captures the essence of life in a most natural way. Scott Frank and Don Roos' script is to be commended for not loading the story with melodramatic incident.

Wilson and Aniston are perfectly cast, and make a most believable and engaging couple. The affirmation of marriage and parenthood is overwhelmingly positive. The couple rarely even quarrel until Jenny becomes understandably overwhelmed with the double burdens of motherhood and a hyperactive dog, but their union is only momentarily jeopardized.

John's playboy friend, Sebastian, whom John so envies for his career success, is shown to have an ultimately empty life in a sharp comparison with the chaotic but fulfilling richness of the Grogans' life.

The bittersweet ending will speak powerfully to anyone who's ever had a deep emotional connection to a pet. At a recent press screening, a roomful of hard-bitten critics fought a losing battle with their tear ducts. Print this post
Posted by Harry Forbes at 1:50 PM