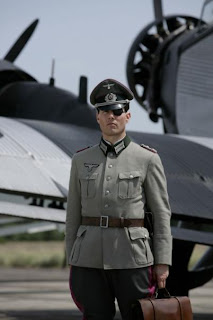 How, some might wonder, could Adolf Hitler convince an entire nation to support his destructive ambitions so blindly, with no regard for the most basic morality? The answer is that not all Germans did, as the World War II espionage thriller "Valkyrie" (MGM/United Artists) effectively demonstrates.

The film is a generally well-made and engrossing re-creation of the true-life plot -- the last of many -- to assassinate Adolf Hitler (David Bamber) and take over the government of a nearly defeated Germany in 1944. The title derives from the code word for Hitler's emergency plan that would have the army reserves stabilize the government in the event of his death. (The story has already had several American and German cinematic tellings.)

Though in early scenes we see an unsuccessful attempt on the Fuhrer's plane by Maj. Gen. Henning von Tresckow (Kenneth Branagh), whose bomb -- cleverly camouflaged as Cointreau bottles -- is loaded just before takeoff, "Valkyrie" concentrates mainly on the efforts of Col. Claus von Stauffenberg (Tom Cruise) and a group of other disenchanted army officers to succeed where he failed.

Stauffenberg asserts, "Hitler is not only the archenemy of the entire world, but the archenemy of Germany," and feels it is his duty not only to save the country, but most especially, the human lives -- Jews, Russians and POWs -- at risk of slaughter.

Stauffenberg will deposit a rigged suitcase at a meeting with Hitler at his East Prussian headquarters, Wolf's Lair, and leave at the appropriate moment, while the other conspirators implement the coup in Berlin. At least that's how it's all supposed to work.

The film was handsomely shot in Germany, at many of the actual locations, and director Bryan Singer maintains a taut, suspenseful pace. But though one obviously roots for the good guys to win, Christopher McQuarrie and Nathan Alexander's script doesn't quite succeed in making you care much about the individual characters, even Stauffenberg -- who desperately worries about his devoted wife (Carice van Houten) and small children as the conspiracy threatens to unravel -- jeopardizing their lives.

Suspense is also inescapably diluted by the historical foreknowledge that the plot will not succeed.

The performances are all strong, though it must be said that, while Cruise cuts a dashing figure in his eye patch and uniform, his All-American can-do determination seems at odds with the more imposing gravitas of his estimable English and European colleagues. Hokey or not, the cast perhaps should have adopted consistent German accents.

Caveats aside, this is an exciting story about moral responsibility and bravery in the face of evil. Print this post
Posted by Harry Forbes at 2:23 PM