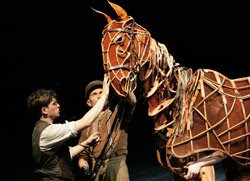 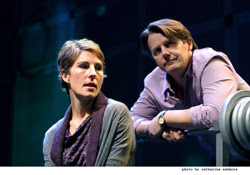 The title is largely metaphorical but a principal character in David Hare's latest play, "Gethsemane," does experience a critical moment of self-doubt that she labels her "Gethsemane moment."

It is not until the end of the play that another character corrects her limited understanding of the term, reminding her that Jesus may have momentarily faltered, but he moved through the crisis to persevere with his divine mission.

Though Hare coyly labels the play "pure fiction," it is -- like many of his other political plays -- inspired by true events.In this case, it's the controversial means by which former Prime .Minister Tony Blair funded his Labor Party. And his

play is just one of several thought-provoking works currently on display on London theater stages.

For those planning a visit, now that the exchange rate is suddenly so favorable for Americans, here is a guide to some current productions.

In "Gethsemane," a fictional cabinet member (Tamsin Greig) copes with the possible career-derailing revelation of her teenage daughter's indiscretions. Meanwhile, the husband of the girl's beloved former teacher, an exceptional educator who has left her job in a crisis of confidence, has gone to work for the prime minister's chief fundraiser, a gregarious Jewish pop music mogul closely modeled on Blair fundraiser Lord Levy.

Though not all of Hare's soap-operalike narrative coalesces convincingly, performances and Howard Davies' production at the National Theatre are beyond reproach, and the play is never dull.

Harley Granville Barker's 1926 version of the play "Waste" (actually written in 1907, but banned by the censors), gets an impeccable mounting at the fine Almeida Theatre by director Samuel West. Here, a rising minister's career unravels after an affair results in pregnancy and scandal.

Though it may have been pure coincidence, Will Keen as politico Henry Trebell bears an uncanny resemblance to disgraced former New York Gov. Eliot Spitzer. "Waste" is a dense, talky play, but filled with provocative ideas typical of Barker -- a contemporary of Shaw and Galsworthy -- who, like Hare today, used theater to illuminate social issues.

John Webster's 1612 tragedy, "The White Devil" -- with most of the principals colorfully dispatched by the end -- illuminates corruption in both the political and religious spheres, the latter embodied by a shady cardinal.

The central intrigue was inspired by real incidents three decades before. England had broken off from the Catholic Church, and the Catholic attempt to blow up Parliament in the notorious Gunpowder Plot was still very much on people's minds, so a corrupt churchman would, no doubt, have been relished.

The cast of 12 (some of them doubling as different characters) acts with brio -- with Claire Price especially vivid as the headstrong woman at the heart of the lurid plot -- at the enterprising little Menier Chocolate Factory theater, but ultimately the over-the-top emoting proved wearying, despite imaginative touches in Jonathan Munby's staging.

Receding further back in time, Sophocles' "Oedipus Rex" -- here, in Frank McGuinness' translation -- receives an exciting mounting by Jonathan Kent at the National, with Ralph Fiennes superb as the doomed king who inadvertently killed his father and married his mother, Jocasta (Claire Higgins), and whose arrogance leads to his own downfall.

A group of kids in the balcony squealed with nervous horror when Oedipus and Jocasta shared a lingering kiss early on.

Fiennes leads a flawless cast, including Jasper Britton, Alfred Burke, and Gwilym Lee, with a chorus of men in black suits actually singing their commentary. Alan Howard, himself once a great Oedipus, is especially fine as the blind soothsayer Teiresias, taunted by the unknowing Oedipus into the revelation that will destroy him. This is no musty classic, but utterly vital drama.

Humanity in all its myriad complexities is the stuff of several other fine productions, most spectacularly the National's sellout hit, "War Horse," co-directed by Marianne Elliott and Tom Morris.

Adapted by Nick Stafford from Michael Morpurgo's young adult novel about a farm boy whose beloved horse is sold to the army during World War I and how he runs away from home and enlists in the army to find his horse, is a heart-stoppingly thrilling piece of theater.

Besides the fine performances, eye-filling production design and evocative music, the lifelike creation of horses by the Handspring Puppet Company was just dazzling. From the moment of the foal taking its first steps to the five-hankie conclusion, the audience was enraptured.

It was refreshing to see a work geared for young people that doesn't patronize its target audience -- unflinchingly presenting the harsh realities of war, including death and devastation, and imparting solid human and family values.

Though young Albert (Kit Harrington) has good reason to resent his alcoholic father (Colin Mace), his no-nonsense mother (Bronagh Gallagher) insists the boy see his good points, and the anti-war theme is another plus. Adults dominated a recent matinee audience and were as transfixed by it as the younger folk in attendance.

If you're traveling to London, this is unquestionably your must-see event, provided, that is, you can score a ticket. Print this post
Posted by Harry Forbes at 2:39 PM