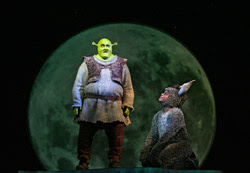 This latest carbon copy of a classic animated film re-creates the movie experience as closely as any, enhanced by composer Jeanine Tesori's generally catchy new tunes. About the only significant business your kids might miss is Fiona's kung-fu tangle with Robin Hood.

Otherwise, all the film's gags (and sentiment) are intact, along with some smart, sometimes campy updating. But unfortunately David Lindsay-Abaire's script adds some unwelcome tastelessness. Shrek's occasional burping has been enhanced by a stream of flatulence jokes, which will only delight little boys who find this sort of thing riotously funny.

The film's positive message about being true to yourself remains intact. Jason Moore directs with fidelity and affection for the source material. But just as the proportionate dimensions of the characters are, by necessity, different with human actors -- Shrek is less than ogre-size, Donkey is as tall as Shrek, and so on -- the result, though never less than entertaining, falls short of the Disney film-to-stage adaptations it seems eager to emulate (The Broadway Theatre, 1681 Broadway; (212) 239-6262 or Telecharge.com). Print this post
Posted by Harry Forbes at 2:33 PM