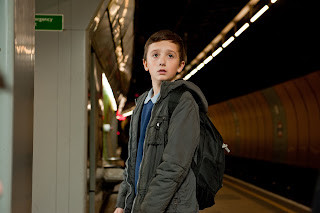 If there were still double-features, “Hereafter” would surely make a most interesting pairing with Woody Allen’s latest, “You Will Meet a Tall Dark Stranger.” Remarkably similar thematically in that both deal with spiritualism and the question of afterlife, the approach could not be more different.

In Allen’s nihilistic view, mediums and such are all charlatans, and it is goes without saying that in his world, there is nothing beyond our earthly lives. In Peter Morgan’s script for “Hereafter,” however, true communication with those who pass on may just be possible, though yes, as we see in one amusing sequence, there are charlatans to be avoided.

In interviews for this film, director Clint Eastwood isn’t saying what he believes, but in any case, his direction is wonderfully persuasive in, at least, leaving the door open. And no matter what viewers may believe, his film is quite absorbing and ultimately extremely touching.

This particularly atypical Eastwood film tells three separate stories about characters grappling with mortality and death, and though it doesn’t immediately seem possible, they do eventually converge.

There’s Marie (Cecile de France), a French anchorwoman and journalist who nearly dies in Indonesia when she’s swept up in tsunami. There’s Marcus (George McLaren and Frankie McLaren who alternate in the role), a little English boy who experiences a profound loss. And there’s George (Matt Damon), a blue-collar worker with a genuine psychic abilities who wants out of the business that he finds all too painful.

“A life that’s all about death is no life at all,” he has told his opportunistic brother (Jay Mohr) who hopes to get rich off George’s special gift.

All these characters are lonely and hurting, and in their individual ways, all are inextricably drawn to contemplate life beyond this mortal coil.

The film is compelling from the start, and certainly the tsunami quite early in the film that eventually leads to Marie’s epiphany is as spectacular as that in any big budget disaster film.

Under Eastwood’s sympathetic handling, the performances are all very fine. Damon proves again how excellent he is at portraying an ordinary guy. The scenes of George putting his psychic gifts to use are played with great sensitivity.

De France convincingly conveys a woman who’s had a glimpse of something beyond, and can’t let it go, even if it hurts her career. And the McLarens are heartbreakingly appealing, as Marcus determinedly searches for answers in an adult world.

The smaller parts are all wonderfully played, including Bryce Dallas Howard as an emotionally vulnerable young woman George meets in a cooking class; Marthe Keller as an Elizabeth Kubler-Ross doctor at a hospice in the French Alps; and Thierry Neuvic as Marie’s boyfriend who believes death is simply the “eternal void.” Derek Jacobi has a cameo playing himself as his audio book versions of Charles Dickens are favorites of George’s character with whom he feels an almost spiritual connection.

The film – largely subtitled in the Paris sequences – has an appealingly European flavor, and may be the most romantic film that Eastwood has ever helmed.

Some might find certain parts of the film hokey – and skeptics may scoff at the overall premise – but I was totally enthralled, and I have a feeling the wide public which could so fervently embrace a movie like “The Sixth Sense” – not to mention anyone who’s suffered a loss -- will find it a fascinating and perhaps even comforting film.

(The film has been rated PG-13 for mature thematic elements including disturbing disaster and accident images, and for brief strong language.) Print this post
Posted by Harry Forbes at 8:11 PM