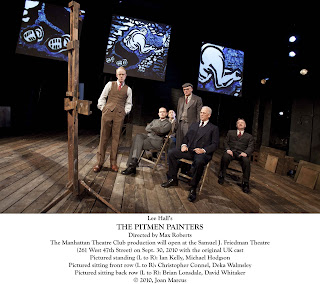 The making of art can sometimes make awfully good theater. Last season’s Mark Rothko drama, “Red,” proved that point, if occasionally on the talky side. And I’m pleased to report that “The Pitmen Painters” turns out to be an even more accessible look at the creative process.

Lee Hall, the writer of “Billy Elliot,” explores another aspect of the Northern England mining country, this time dramatizing the true story of the Northumberland miners who, breaking the stereotypical mold, became painters of some repute and were known as the Ashington Group. And their first exhibition was the first such of working class artists in Britain.

Hall begins in 1934 with art instructor Robert Lyon (Ian Kelly) vainly attempting to teach a traditional art course to the rough hewn Ashington men who have elected to educate themselves on art appreciation. Da Vinci and Michelangelo hold little interest to the men, so Lyon, in frustration, suggests they try their hands with a brush and canvas themselves.

Paintings of mine-related activity give way to other themes with growing expertise and widening horizons. There’s crusty George Brown (Deka Walmsley), the head of the group, Harry Wilson (Michael Hodgson), a socialist dental technician, Jimmy Floyd (David Whitaker), a character known as Young Lad (Brian Lonsdale), and the miner with the most promise, Oliver Kilbourn (an outstanding Christopher Connel) who, though this is an ensemble work, is the nearest to what would be considered the central character.

Two female characters add variety to what could have been an all-male talkfest. There’s Phillippa Wilson as Helen Sutherland, an empathetic patron of the arts who wants to sponsor Oliver, and Susan Parks (Lisa McGrillis), a no-nonsense art study model who momentarily upsets the men’s equanimity. All are superb (and indeed have been playing these roles off and on for three years). Lonsdale doubles most impressively as the Young Lad with a heavy Yorkshire accent and artist Ben Nicholson with a posh upper crust one.

Hall’s play – inspired by a book by William Feaver --is never static and he cleverly meshes the artistic and sociological elements. Under Max Roberts’ direction, moves fluidly, as the action spans through 1947.