A Life in the Theatre (Gerald Schoenfeld Theatre) 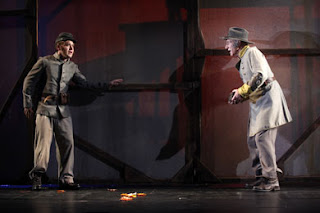 I’d not seen David Mamet’s early paean to the theater since many years ago when Jose Ferrer took over the leading role from Ellis Raab at the Lucille Lortel. I recall going with my parents, both former actors, and thus the seemingly perfect audience for this sort of backstage story.

But despite Ferrer’s excellence, I recall we were all fairly disappointed. And I had the same feeling at the conclusion of Neil Pepe’s perfectly fine production, one much slicker than what I recall on Christopher Street. But the play remains, well, thin: amusing but never truly hilarious, and occasionally touching without ever rising to poignant heights.

Nonetheless, there’s pleasure in watching Patrick Stewart – especially after his last New York outing as Macbeth (recently reprised on PBS’s “Great Performances”) -- take on such a predominantly light-hearted role. He’s Robert, a veteran actor mentoring newbie John (T.R. Knight) with whom he’s appearing in rep. We observe the pair in a series of short scenes, some backstage, some in the plays (all Mamet inventions) in which they appear.

Those pastiche excerpts – set in such diverse backdrops as the French Revolution, the Civil War, a hospital operating room, a rowboat at sea, etc. – are amusing to varying degrees, and in any event, stand in contrast to the dressing room sequences where we can see Robert’s essential loneliness and how emotionally dependent he’s become on his young colleague.

Stewart plays with a refreshing lightness and an assured sense of comic timing, his readings as masterful in their way as his interpretation of Shakespeare’s Scottish lord.

Knight, for his part, astutely conveys the protégé’s initial eagerness and compassion which ultimately morphs into wariness and fatigue towards the increasingly needy older actor. He and Stewart definitely have the requisite chemistry for this two-hander.

Thus, fans of Stewart and Knight should not be disappointed. Despite some passages in the play that are less than Mamet's best, these two pros ensure that the 90 intermission-less minutes pass pleasantly enough.