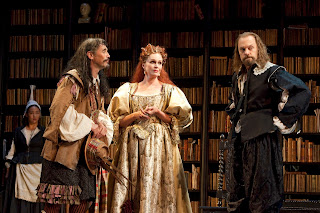 Though it was nearly 20 years ago, I remember the original Broadway production of David Hirson’s exceedingly clever verse homage to Moliere as a particularly delectable theatrical experience, even as I recall a strong first half, followed by a less brilliant second.

But in director Matthew Warchus’s astute present production – gorgeously designed by Mark Thompson in a floor-to-flies 17th century library (the original was a stylish white, spare setting) – I felt no such drop-off. It played beautifully from start to finish with Hirson’s satiric points about high culture versus populist entertainment sharper than ever.

As Valere, the incredibly crude, vulgar, gauche, self-centered upcoming playwright with whom the established Elomire, who fancies himself the “next Corneille,” must form an alliance by order of their mutual patron, The Princess (Joanna Lumley), Rylance is simply stupendous, and I don’t use the word carelessly. With a Tom Smothers-like guilelessness and a free-associating string of non-stop gibberish (some of it scatological and sexual) pouring out of him, he surpasses his hilarious work in Warchus’s “Boeing Boeing” revival two seasons ago.

In the face of such a tremendous tour de force, co-star David Hyde Pierce is basically the straight man, but it’s a part he takes with consummate skill, and after all, Hirson sees to it that ultimately Elomire gets the upper hand in terms of our sympathy.

The gender change of the patron – originally a Prince – adds variety to the surfeit of male characters, however historically inaccurate it might be, and offers New Yorkers the chance to see the “Absolutely Fabulous” star stretch her dramatic chops in what is basically a classical role, and she is superb. Her entrance amid a flurry of gold confetti is a delightful effect.

It’s gratifying to see Hirson's literate, witty play finally get its rightful due in such a splendid production.